Bad luck in the mine, or is she just no good? 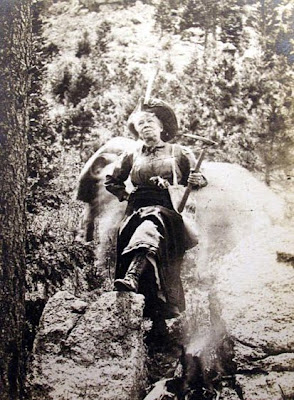 As early as the second century B.C., women commonly worked in the Egyptian gold mines.

Almost universally, superstitions about women in the mines bringing bad luck appear in various cultures.
This, despite evidence suggesting women entered the mines as workers in various locales, both above and below ground, very early in the history of mining.

As early as the second century B.C., women commonly worked in the Egyptian gold mines. Until it was made illegal in 1842, female miners were also fairly common in Scotland, Yorkshire, Cumbria and throughout the United Kingdom.

Still, they weren't always welcome. Cornish miners, who have been unafraid to venture underground for more than 1,000 years, have passed on a tale from father to son, of a race of beautiful women living long ago in the forest, that tempted men by luring them away from home and family.
“To punish them the gods blasted their forest homes, changing the stately trees into black rocks which were covered by earth,” writes Mara Lou Hawse.
“Into these carbonized rocks the spirits of the sirens were driven for an imprisonment that would last for centuries. After serving their long period of penance, these sirens came out to wreak vengeance on mankind. Thus whenever an explosion occurred in the mines, it was a sign that more of these mythological sirens were escaping from the wall of coal, accompanied by the poisonous gases which carried death to every miner in their path.”
In Russia, Italy, and in the American West, similar stories of bad luck and taboo rose to the surface. And the superstition has persisted almost right up to modern days.
When First Lady Eleanor Roosevelt visited Willow Grove Mine in St. Clairsville, Ohio in March of 1940, miners warned that there would be trouble. To lend credence to their stories, on March 16, a few days after her visit, an explosion ripped through the mine killing 72 miners.
Here in Colorado on Nov. 9, 1972, sixty miners walked off the job at the Straight Creek Tunnel when Janet Bonnema, an engineering tech for the Division of Highways challenged the idea that a mine or tunnel was ‘no place for a woman.’
Bonnema took the Colorado Civil Service exam for an engineering position Division of Highways in 1970.
“She was notified via letter (addressed to Mr. Jamet [sic] Bonnema) that “he” had qualified for a job at the Straight Creek Tunnel. When she called to discuss the salary, the state employment officer the offer had been for a male (he thought Jamet was James), and that she didn’t want the job because women were not allowed in the tunnel,” according to recent story in Colorado Heritage by Dianna Litvak.
“Bennema said that indeed she did want the job, and accepted a position created for her in the tunnel office. But she never received a hard hat, protective clothing or ID badge, like the male technicians, and was barred from the tunnel,” wrote Litvak.
Her lawsuit, with the backing of the U.S. Department of Transportation and the Colorado Civil Right Commission, eventually remedied that.
When the hard-rock miners warned she would cause a fatal accident and walked out, she was quoted, “When those guys buy the tunnel then I’ll say ‘Ok, it’s your tunnel’ and I’ll leave.”
Another relatively well-known character of the early mineral rush of Colorado was Ellen Elliott Jack, or “Captain Jack’ as she was commonly known.
Ms. Jack headed west from New York looking treasure foretold by a gypsy and first established a boarding house in Gunnison and began poking around the nooks and crannies of the hills there.
“During her trips to the mountains, Ellen discovered the very profitable Black Queen silver mine. The mine provided her with happiness as well as heartache,” according to the Dickson Research Center at the National Cowboy & Western Heritage Museum.
It, and her rough and tumble lifestyle in the Colorado mining towns, also provided ample opportunity to use her shooting irons – with which, she became quite adept.
Late in her life, she always carried a pickaxe and a pistol where ever she traveled.
"I do not fear man or devil; it is not in my blood, and if they can shoot any straighter or quicker than I, let them try it, for a .44 equalizes frail women and brute men, and all women ought to be able to protect themselves against such ruffians," Jack was quoted.
If you messed with her mine, I guess she believed in creating her own brand of bad luck.
###
Posted by ___ Restless Native at 6:44 PM