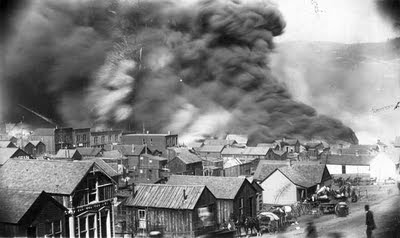 Nothing scared the residents more than the dreaded cry of fire.

Colorado is not alone in fearing fire. But with the ramshackle, haphazard, tent-city way many of the mining districts sprang into being, coupled with high altitude, windy, dry weather in the state — entire cities could disappear in a puff of smoke.
“Nothing scared the residents more than the dreaded cry of fire.” according to Duane A. Smith in his recent book, San Juan Legacy: Life in the Mining Camps. “Camps and towns all heard it eventually. It was hoped that the fire laddies were up to the challenge.”
The fire could come from anywhere.
“A forest fire which was started from a camp fire last evening had been burning all day north of the mining camp of Gold Hill, a town of 500 inhabitants, fifteen miles from here. The timber was dry as powder, and a fierce wind carried it over five miles of dense timber in a short time,” read the Nov. 16, 1894, dispatch of the New York Times from Boulder.
“Fifty people came into Boulder this afternoon in wagons from Gold Hill. They report that the business men and miners were carrying what goods and property the could into the mining tunnels, and had abandoned hope of saving their stores and their dwellings.”
Early property loss estimates for the first day of that fire was over $1.5 million.
“The residents of Gold Hill, who have not come to Boulder, have assembled at the top of Horsefel Mountain, and are watching the progress of the flames as they consume their former homes. The wind is blowing furiously, and drives the fire before it in larges sheets of flame,” said the Times.
With the threat of fire came the development of various innovative warning systems.
Cripple Creek, for example, after suffering through two devastating fires early in its existence, was particularly jumpy.
“The town itself was visible from almost all of the railroads and mines …” wrote turn-of-the-century-era resident Raymond Colwell in 1962. “Occasionally, we would be awakened by a chorus of short, sharp toots from trains and mines in the dead of night, and we’d roll out to see where the fire was. A fire, even though just starting and very small, almost sure to be seen by some train crew or mine engineer who would start his whistle going, with the chorus taken up by others as they heard the alarm,” according to Colwell.
“Another commonly used fire alarm was five or six pistol shots as fast as the gun could be discharged. The townspeople were naturally fire conscious. Some of them remembered the big fires of 1896, and everyone realized that like all mining camps, another such conflagration could occur at any time.”
But, in addition to whistles and pistol shots, other ‘modern’ alarm methods were beginning to be used as well.
“I have a card listing the locations of the 26 fire alarm boxes in Cripple Creek, about 1903 or 1904,” Colwell said. “It would probably be difficult now to even locate some of the street intersections themselves, and I’m sure most of the buildings near them have been town down. The boxes were numbered from 5 to 45, and when a box was pulled, the number rang in all the stations, and also on a big bell on the Central station which could be heard all over town. Box Number 12, for instance would be one stroke, a pause, two strokes then a longer interval, and repeat. That was great for us kids, because if we were not otherwise engaged we knew just exactly where to head to see the excitement.”
Getting to the fire was also dangerous in the mining camps at times.
“Driving a spirited, excited team to a fire wagon could become quite a trick on some of the streets in Cripple Creek, especially when there was snow on the ground. Going uphill, the men used to hop off and push when the going got rough, but the hardest thing was to hold the outfit back when going downhill. I well remember one bad crackup when No. 2, The Old Town Company, came down Fourth Street and tried to turn on Eaton. The horses, a beautiful team, slid around and into the fire plug there and turned over. I believe the driver was fatally hurt and two other firemen put in the hospital. The wagon was completely wrecked, and I think one of the horses had to be shot,” recalled Colwell.
###
Posted by ___ Restless Native at 6:44 PM