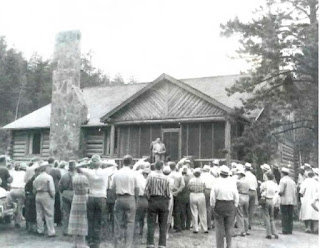 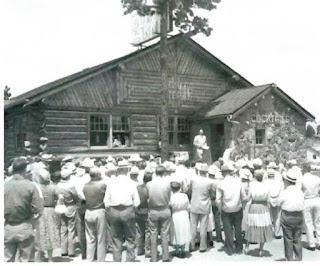 Woodland Park was the place to go for a good time

To hear many folks tell it, illegal gambling built much of Woodland Park.
The Ouray Casino building was constructed in 1948 by Robert Rex Beach and Homer Cooley and was used as a casino that was part of the Brazenhead located to the east on U.S Highway 24 on a different piece of property. The two buildings were called "Ouray Inn and Casino, " according to research done by True West Properties.
Legend has it that an underground tunnel connects the two buildings, and a bordello was also part of the mix. The building was owned by LeRoy and Mickey McManaman, from Texas, and licensed by the state of Colorado, as a private club.
The building, a rustic structure, originally had plush wall-to-wall carpets on the first floor and five bedrooms on the second floor.
Gambling became popular in Woodland Park in the 1940 and many locals were members of the club., according to True West Properties research.
"It was known at the time, that Woodland Park was the place to go for a good time and many visited to gamble, but many citizens of Woodland Park did not approve of gambling and it was against the law," according to an oral interview of Mert Cummins, conducted in 1990.
"As early as 1948, raids of these casinos began. Most times, the casinos were forewarned, and the gambling equipment had been removed. It wasn't until the early 1950s that the gambling issue came to a head with the citizens of Woodland Park taking sides and open fighting began," according the interview of Mert Cummins.
On Christmas Day, 1951, the Ouray Casino was raided and police found gambling paraphernalia. According to a later article by Jan Pettit, in the Ute Pass Courier, dice found during that raid would only produce even numbers, and cards that could be read from the obverse side were encountered. Also, it was determined that employees would pose as customers, to make the place seem busy.
The owner, Leroy McManaman, was also out on $40,000 bond in Wichita, Kan., in connection with three robbery charges.
By 1953, Leo A. Hoegh, who would later become the Governor of Iowa, purchased the building at federal sale to clear back taxes, paying $1,150 for the property and $55,000 in liens and mortgages against it. It sold again in the summer of 1957, this time for only $7,000.
It went through several owners, eventually becoming the one-time home of the Woodland Park branch library of the Rampart Library District in 1982. Upon good authority, there was still remnants of Casino days evident, until the library district's renovation was completed. The library occupied the building until the late 1990s, when the new Rampart Range Library was built.
Gabe Brock also verified gambling in Woodland Park in the late 1940s and the early 1950s.
Brock, longtime owner of the Crystola Inn, was quoted at the time of "Big Bert" Bergstrom's death on March 12, 1986, in the Ute Pass Courier,  as reported by Liza Marron.
Berstrom had owned and operated the Thunderhead Inn and Ute Inn, among other places.
"He had 75 slot machines and I had 75 slot machines. We pooled them and put them out all over the county. We had sanction from Teller County Sheriff. We went along there for about four years without any trouble. We would rake a little off each week, and with that we built the Woodland Park Community Church. The VFW was in trouble,  and Bert bought them a building behind the Ute Inn," remembered Brock.
The Eldorado Club, which later became Preschool in the Pines, was also one of Bert's gambling clubs, Brock told the paper.
"The proceeds from gambling built a lot of Woodland Park," he said, but it all ended in 1952 when a new mayor closed things down, according to Brock.
Posted by ___ Restless Native at 10:15 AM

Nicest information!!! I'll be enchanted to greatly help due to what I've learnt from here. https://juegosdecasinoonlinecolombia.com.co/

put them in the payroll the gambler would receive a mysterious telephone call telling him to see Smith & Jones.top online casinos