On type lice and pouring pigs 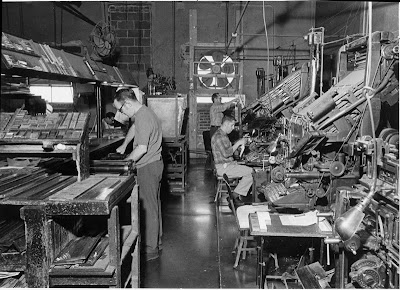 "Madame, we are the press. You know our power. We fix all values. We set all standards. Your entire future depends on us." — Jean Giraudoux, The Mad Woman of Chaillot (1945)

I enjoyed recent discussions with another "ink-stained wretch" on the "old days" of hot type. The weathered newspaper veteran seemed to enjoy it as well.
"It was refreshing to hear words like "Elrod, Ludlow, type lice and one of my favorites, pouring pigs," noted Rich Leinbach, Director of Publishing Systems for the Goshen News in Goshen, Indiana. For the uninitiated, a "pig" was a lead casting used in Linotype typesetting machines. And, on hearing of our common reference points, he told the following story.
"This brings me to a fond memory of pig pouring, back in the late 70s. I was fresh out of high school and although our newspaper had already converted to offset, we still used a decent amount of hot type in our commercial printing department.
"It was late one day and I had the job of firing up the lead furnace to pour a fresh batch of pigs. I had the pot filled with molten lead, had skimmed off the dross and was just beginning to pour the pigs when the valve broke, in the open position.
"Needless to say, gravity took over and the entire pot of lead became one giant pig on the floor, in a matter of a few minutes.
"To make matters even worse, just after my masterpiece had cooled into a solid mass, the entire staff of "Big Wigs" came parading through, after a late meeting. There I stood, pry bar in hand, trying to get rid of the evidence before anyone could find out. Ah . . . those WERE the good old days."