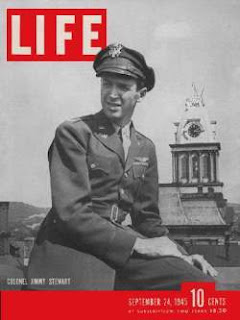 The United States Air Force has a tremendous presence in the Pikes Peak Region with the Academy, Peterson Air Force Base, Schriever Air Force Base, and more than a few retired Air Force personnel.
The Air Force Academy, by itself, has nearly 6,500 active duty personnel and an economic impact of $700,693,967, according to its 2006 economic impact statement.
Being civilian, it is impossible to miss an impact like that, but still we try to put a face on it. Yes, the Air Force to us is the beautiful Academy campus, or the retired Colonels living next door, or the flyovers during football games.
But still, for convenience, some of us need something emblematic to tie to 60 years and the image of the Air Force.
I choose James Stewart.
Maybe that is right, wrong or irrelevant – you are the judge – but here is my reasoning.
Jimmy Stewart, the eldest son of hardware store owner from Indiana, Pennsylvania, saw WWII coming and joined the Army Air Corps as a private in 1940.
Stewart had already won and Oscar for “Philadelphia Story,” according to the official website of the United States Air Force but put service before himself.
“Despite attempts to use him for publicity, he fought to become a pilot and fought to get into the war,” the site says.
“Stewart went on to fly B-24 Liberator bombers over Europe, commanding at the squadron and wing level. Ironically, his first film back after the war was “It’s a Wonderful Life,” in which he played 4-F George Bailey. After the war, Stewart also played a major role in the formation of the Air Force, serving as a spokesman for the Air Force Association’s effort to advocate the need for a separate Air Force – ultimately succeeding when President Truman signed legislation in September 1947.”
Stewart continued to serve in the reserves and eventually reached the rank of Brigadier General in 1959. Among his military awards are: Distinguished Service Medal, Distinguished Flying Cross with Oak Leaf Cluster, Air Medal, French Croix de Guerre and the Presidential Medal of Freedom.
Stewart did not try to call attention to his service, preferring instead to avoid mixing his celebrity status and military accomplishments, if possible.
He died at the age of 89, on July 2, 1997.
“When interviewed about his techniques, the self-effacing actor replied characteristically,” according to his obituary that appeared in the New York Times.
''I don't act, I react,'' and described himself as an ''inarticulate man who tries,'' without having ''all the answers, but for some reason, somehow, I make it.'' He offered his criterion for success: ''If you can do a part and not have the acting show.''