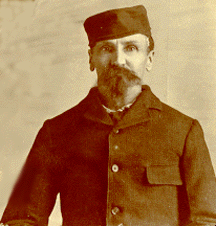 Who did the killing and where they went to dental school?

Two recent Colorado tales are favored by revisionist history.
First, Doc Holliday’s tombstone in a Glenwood Springs graveyard was erroneous.
“A monument at Linwood Cemetery has offered such details as when Holliday was born — 1852 — and the place of his birth — Valdasta, Ga. Visitors learn that he attended Baltimore Dental School, and that he died in a Glenwood sanitarium,” notes a recent Associated Press article.
“The trouble is, however, this information is wrong.”
Holliday was born in Griffin, Ga. in 1851, not 1852, and he went to school at Pennsylvania College of Dental Surgery in Philadelphia, not Baltimore. He died in the Hotel Glenwood before the town had a sanitarium.
The Frontier Museum in Glenwood Springs with help from the city corrected the errors a few years ago by installing a new monument built by Snyder Memorials of Grand Junction.
The original monument was put up sometime in the 1950s when little historical data was available. Holliday died Nov. 8, 1887 and is believed to be buried in Linwood Cemetery near the monument.
In another possible instance of correction presents itself in the case of Alfred Packer, the “Colorado Cannibal.” A Denver Post article by Nancy Lofholm notes that Packer ate his five fellow travelers during an 1874 snowbound winter in the San Juans .
David Bailey, curator of the museum of Western Colorado, led a crew of archeologists that spent several days in the fall a few years ago, using ground-penetrating radar and ultra sensitive metal detectors to examine the massacre site in Hinsdale County. Bailey will be happy if he finds anything that upholds his belief that Packer was wrongly accused of murdering his five companions.
Bailey has no doubt that Packer ate the would-be prospectors in Slumgullion Pass in the winter of 1874 but he thinks evidence will eventually prove another member of the party, Shannon Bell, actually did most of the killing.
“Packer wrote in a confession that after subsisting on rose buds, pine gum and boiled moccasins for weeks while trapped in the deep snow, Bell went berserk and killed the others with a hatchet.,” according to Lofholms article.
“Packer became a diner rather than dinner because he was scouting for food when the massacre happened.” In his confession, he said he shot Bell in self-defense when he attacked him upon his return.
Dumbbell-shaped nuggets, believed to be bone bits, were found buried in soft dirt down a hillside from where the five victims of the crime were buried, the Denver Post reported a few years ago. No definitive word yet whether this new information proves either guilt or innocence. In the meantime, Bailey and other will continue to review information to try and find out what really happened up there in snowy San Juans.
Bailey has written several articles since the 2001 discovery by Dr. Richard Dujay of Mesa State College turned up microscopic fragments in the dirt taken from under Shannon Bell’s remains that were matched with the bullets remaining in Packer’s pistol. He holds that this corroborates Packer’s version of what happened, but many historians disagree saying that it only proves Bell was killed by a gunshot.
###
Posted by ___ Restless Native at 7:19 AM