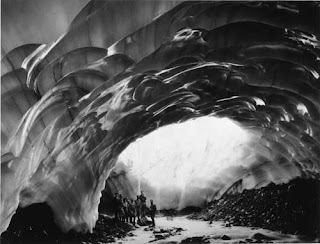 Further explorations have been made in the wonderful ice cave discovered on Cow Mountain, two miles from Gillett

The old newspaper labeled the startling discovery "a natural refrigerator.”
It went on to describe ice caves 200 feet underground, and about two miles from the town of Gillett in a headline. The discovery was made by a miner and reported in the August 17, 1897 edition the Cripple Creek Morning Times. Kathy Klein, a local history buff, brought it to my attention with a note a few years ago.
“This fall my friend Chris Clausen, who is the Cripple Creek Elks historian … told me about some old Colorado newspapers that he had won on Ebay,” said Klein in the note. “He was particularly taken with an article about ice caves outside Gillett and told me about this article as he knew that I had been researching the Gillett area off and on for another friend.”
The edition of the Morning Times itself describes the caves this way:
“Further explorations have been made in the wonderful ice cave discovered on Cow Mountain, two miles from Gillett. Three chambers have so far been discovered. The first, about 14 x 16 feet, heavily hung with icicles in every conceivable form resemble stalactites. From the first chamber a small passage led to still another, more wonderful and beautiful, in which the ice blended in various colors under the light of the candle, reflecting rays as from a thousand mirrors. From this cave, a passage scarcely large enough to admit the body of a man was discovered leading down at about an angle of 40 degrees, to a large cavern, perhaps 200 by 300 feet. Climbing to the ceiling were great masses of ice, like billows, and banked along the sides of the walls many feet in thickness were tons of ice, taking on the most grotesque forms imaginable and casting awesome shadows.”
The article describes more of the cavern.
“In the center of the room there is lake about 40 x 65 feet, clear as crystal and quite deep. There must be some outlet to it, for water drips constantly from the ceiling, yet the level of the body never rises, or overflows. The water is wet and pure, and as cold as the ice-coated walls of the room in which it is located, at a point 200 feet underneath the surface of the ground. There are undoubtedly other caves which have not yet been opened.”
Kathy Klein and her friend Chris Clausen continue to search.
“We have both done some more looking both backward and forward in the newspapers and other places and can find no more mention of the ice caves. I was wondering if you have ever run across anything on them or think the article may have been a hoax? I do hope that someday we will be able to find more about them, it’s so fascinating.” Klein wrote.
Years ago, before his death, Attorney Ken Geddes, graciously answered my inquiry about ice caves near Gillett, and as things like that go, we digressed into other topics of mutual interest. Namely what it was like growing up in Victor during the ‘30s and ‘40s. Geddes parents owned and published the Times Record (previously named the Morning Times and more recently called the Gold Rush) from 1941 to 1951.
“I have heard of them off and on for several years and have explored Cow Mountain several times for any evidence of them,” said Geddes of the caves. “Unfortunately, I was unsuccessful but that doesn’t mean they are not there! I have an old book or publication regarding them but just like the caves themselves, I have trouble finding the article — I’ll keep looking,” he promised.
###
Posted by ___ Restless Native at 9:06 PM

We are on the hunt. We just recently purchased land on cow mountain and we are very interested in discovering these "ice caves"