Not one to call attention to service 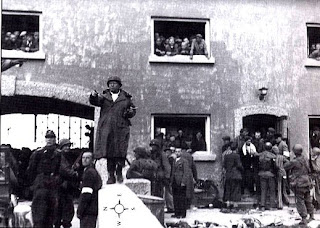 Upon reflection, of the veterans I have known, many were not inclined to tell war stories or call attention to their service.
Paul Butler was a case in point. When I delivered papers for the Durango Herald as youngster, Paul had me set up a paper tube on the corner of my folk's property, so he could come down Dunlap Hill to pick up his papers every day on his way to the Pondarosa Restaurant. The family farm on Granath Mesa, north of Dolores, was too far out for most kinds of deliveries. Occasionally, when he needed to make a winter trip, he would have me and my dad go check and make sure things didn't freeze up or something during his absence.
According to his obituary in the Dolores Star a few years ago, Paul joined the Army in 1941. "He was due to be discharged when Pearl Harbor was bombed. Paul was quickly involved in World War II. "
After training in Oklahoma, Texas, Louisiana and New York, he shipped out across the Atlantic with the rest of 45th Thunderbird Division on the Susan B. Anthony, the same outfit as my Uncle "Stub".
"He took part in beachhead landings in Sicily, Anzio Beachhead in Italy, and in France. He was involved in liberating the Dachau Death Camp near the end of the war. For his exemplary service he was awarded the Bronze Star."
After World War II and buying the family farm on Granath Mesa, he married and raised four kids with his wife Marge. He was known as excellent fence builder and a perfectionist at everything he did. He served on the Dolores school board, was a member of the Baptist Church for over 80 years and hiked down and out of the Grand Canyon over 50 times.
"Paul was concerned citizen and a passionate advocate of causes he believed in. He was patriotic and proudly displayed the American flag," according to the Star. "He was known for his outspoken, blunt personality. One always knew where he stood on any subject, yet he had a sense of humor and a soft heart."
There were lots of other good deeds that Paul did and many noteworthy accomplishments in his long, full life. But just like many veterans, he really wasn't inclined to call attention to all of them. We should probably consider that on Nov. 11, and every day for that matter. Remember all who served.
###
Posted by ___ Restless Native at 12:12 PM