Nobody remembers who finished second 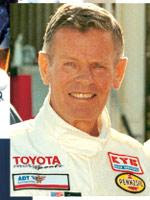 (This originally appeared as a newspaper column in July, 2007.)

You can tell right away when you are speaking with a legend. He says precisely what is on his mind and never pulls a punch. Confident, opinionated, an inhabitant of righteous ground, Bobby Unser -- the man that the International Motorsports Hall of Fame calls the undisputed king of the Pike Peak Hill Climb -- even answers the phone that way.
“To me, if I had a choice, I would have run Pikes Peak every day of the year. I made a science out of racing on that mountain,” Unser said last week from his home in Albuquerque, N.M.
“That is my mountain. I figured out how to utilize the mountain best.”
The evidence backs his him up. Bobby Unser won the Hill Climb 13 times over a span of 30 years but says his first and last were the most memorable, with this qualification however, “For all you know, I will come back and win it again.”
His first win came in 1956. It was important to him because it “kick-started a lot of demand for me as a driver.”
His last win (to date) was in 1986.
“I had been gone 12 years and a lot of people had given up on the ol’ boy. They were saying, ‘he’s been gone too long and he’s lost his timing.’ I came back and kicked their butts.”
By 1986 he had matured even more as a driver. “You don’t quit advancing. But going back was a challenge. My brother Al, advised against it. ‘You are already king of the mountain,’ he said but I wanted to go back. I had a good car and good team… It was fun. And the road really hadn’t moved at all.”
As a child, his uncle Louis, known as ‘the old man of the mountain’ was an Unser brother’s hero as they grew up in Albuquerque. Three of his brothers were born here, though Al is a New Mexico native.
“Louis was my mentor and as a child I told him I will be the new king on this mountain. I told him I was going to take all his records and I did, one at a time. He provided a lot of desire and it helped me an awful lot. I set out to beat him and that is how I became the racer I am.
Winning at Pikes Peak helped open doors in the racing world. And lead him to Indy.
“Of course Pikes Peak didn’t have the juice of Indy, but what does.”
He continued to win at Indianapolis -- three times, in 1968, 1975 and again in 1981.
After first winning at Pikes Peak, he said, “I decided to see how far this (racing) could take me.”
He only lost four times on the Peak. “I should have won those as well, but something went wrong each time.”
Bobby Unser says the Peak allowed him to develop in other ways. “I am a self-taught engineer and conditions on the Peak are perfect for developing that kind of thing --trying to figure out how to make your car go faster.”
He thinks that is the main thing that sets apart the racing stars of today from the legends of yesteryear.
“Drivers of the ‘60s and ‘70s were better than they are today. Now, they have become specialist and only drive one kind of race. The universal drivers like me and my brother Al, Parnelli Jones, Mario Andretti, Gordon Johncock, and Johnny Rutherford are gone. They would race anything there was if there was a chance of getting paid for it.”
That is related to the single most-asked question, Unser says.
“How much of it is the car? And how much of it is the driver? Today, I would say it is 75 to 80 percent the car, and 20 to 25 percent the driver. Back then, it was the opposite. Simply because of the change in technology.”
Though he knows and likes most drivers running the race today.
“I know all the people running in Hill Climb. They are basically clean-cut, good people that truly like the mountain. Though, now they are going to pave it and screw it up.”
He blames the city for that, particularly the city council that allowed the Sierra Club to force that issue.
“That road should have never been paved… It is just not right. It was a thousand times safer with better traction and there is thousands of miles of crushed granite roads just like it. In general, the city should have never caved in. Never even a fight. I can’t understand how they could do that.”
But that is characteristic of a man who could never picture himself doing anything other than winning.
###
Posted by ___ Restless Native at 6:50 PM