Characters of Teller County: 'Somewhat disfigured but still in the ring.' 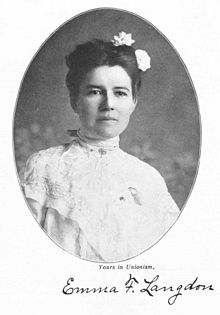 Union printer Emma Langdon gets the paper out

Is Colorado in America?
During the Cripple Creek mining district strike of 1903-1904, both sides – labor and management, asked the question. And media, in its own way, tried to answer.
The violence that erupted between members of the Western Federation of Miners (WFM) and corporate mining interests determined to smash the union in the district, was state, national, and even international news for much of the first decade of the last century.
Newspapers from around the world could not resist the temptation to comment and weighed-in with their own versions of the compelling story. From the local Victor Record, to the New York World, to Denver’s Polly Pry weekly that covered everything from debutantes to labor conflicts, the press was fascinated by the fracas.
In 2004, historian Bridget Burke contrasted the flair of Nell Anthony’s Polly Pry accounts with those of union printer Emma Langdon of the Victor Record.The Record was considered “the voice” of the WFM and Emma Langdon and a crew of replacements barricaded themselves inside the Record when martial law was declared and produced a morning edition.
This, she accomplished after the arrest of her husband, brother-in-law (both Record typesetters) and the editor George Kyner.
“Somewhat Disfigured, But Still In The Ring,” screamed the headline on that forbidden edition.
Later, martial law activities and deportation by Colorado Governor James H. Peabody prompted The New York World to telegraph the Governor and demand answers.
The World asked Peabody for a “statement of your reasons for permitting Colorado troops to dump 91 union miners on the Kansas line, leaving them destitute on the prairie, miles from habitation. No explanation of this action has reached the East.”
Peabody answered, “The reason for deporting the strikers and agitators from Cripple Creek was the dynamite outrage of June 6, whereby fourteen non-union miners were instantly killed, and the subsequent street riots and killing of two non-union miners by the same element … Rioting, dynamiting, and anarchy has had its day in Colorado.”
“Big Bill” William D. Haywood, secretary-treasurer of the WFM, answered the answer.
“There has been no insurrection in Colorado except that emanating from the occupant of the capitol building. Nowhere in the United States will you find a higher class of working men than this Commonwealth … And it must be remembered that no violence of any description had taken place until after the governor had ordered out the troops, and in the language of George Bell, then ‘hell began to pop.’”
Advertisements from the labor side of the fight during the conflict complained “Habeas Corpus suspended in Colorado, Bull pens for union men in Colorado, Soldiers defy the courts in Colorado, Union men exiled from their homes and families in Colorado, Corporations corrupt and control administration in Colorado, and Citizens alliances resort to mob law in Colorado.”