Characters of Teller County: Can't get any more stranded than that. 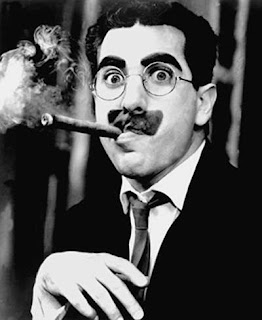 "That's the most Ridiculous thing I ever heard!"

Groucho actually began his career as a female impersonator, according to the March, 1974 issue of Playboy, playing a singer in a small-time vaudeville troupe, The LeRoy Trio, in 1905.
“With the onset of puberty, and subsequent change of his voice, he was left stranded by the troupe in Cripple Creek, Colorado, and you can’t get any more stranded that,” said the magazine article.
Groucho told the tale in his book, “Groucho and Me,” which was first released in 1959. He went looking for the leader of the act, Gene LeRoy, only to find out he had been abandoned.
“I returned to our boardinghouse to question Larong (LeRoy) about our future plans, only to discover that the master showman had had hastily packed his blue kimono, his evening gown and his mascara and had taken it on the lam, never to be seen or heard from again,” according to Groucho.
After the LeRoy Trio fell apart, he tried work driving a grocery wagon between Cripple Creek and Victor.
“Though he had never seen a horse, he wrangled a job as a wagon driver until Miene or ‘Minnie’ (his mother) could send him his train fare home,”  according to the Playboy article.
His next engagement ended almost as abruptly in Waco, Texas, when the Englishwoman who had hired him, ran off with a lion tamer who shared the bill.
“He then found a job cleaning actor’s wigs, which he describes as a ‘hair-raising experience.’”
His mother decide to take matters into her own hands and organized an act called the ‘Three Nightingales,’ which featured him, his brother Harpo -- who couldn’t sing at all, and a girl who sang off-key. They became the ‘Four Nightingales’ when brother Chico, who had lost his job as a lifeguard (he had to be saved from drowning by another guard). His brother Gummo, eventually replaced the musically-challenged girl, and they became the ‘Four Marx Brothers. Gummo was later replaced by Zeppo, a younger brother.
The Four Marx Brothers knocked around vaudeville for years, finally hitting it big on Broadway in the two –year run of “I’ll Say She Is.” Other successes followed with “Cocoanuts,” and “Animal Crackers.”
Translated from Broadway to film, these and other monster smashes secured the Four Marx Brothers commercial success.
Groucho created his own solo success in radio programs like “You Bet Your Life,” which lasted until 1963, and with his brother Chico, playing the comic lawyers of ‘Flywheel, Shyster and Flywheel.’
Posted by ___ Restless Native at 6:54 AM