Swept under in prison's broom factory

“It's hard at times, but it makes a kid strong in ways that most people can't understand. Teaches them that even though people are left behind, new ones will inevitable take their place; that every place has something good - and bad - to offer. It makes a kid grow up fast.”
― Nicholas Sparks, The Lucky One 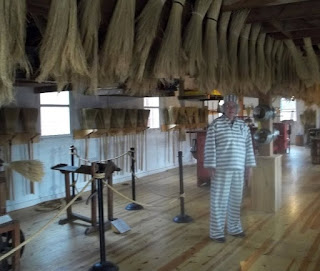 Wyoming Territorial Prison beset by problems from the outset

Hard time in the Wyoming Territorial Prison sort of swept some prisoners under a rug of obscurity. But maybe a person who had lost his or her way, needed time crawling in shadows to get there life back on track. It seems to be a ghostly existence.

Built in 1872 and restored in 1989, Wyoming Territorial Prison, operated near Laramie from 1873 to 1903. Over 1,000 men and 12 women incarcerated in a span of 30 years. In the early days of the prison, it was only about 10 degrees warmer inside than outside during the winter until a radiator system was installed. Prison was expanded 1889 and notable criminals, including Robert Leroy Parker (Butch Cassidy), Clark “the Kid” Pelton, and Ellijah Canary all served time there.

The broom factory was constructed and staffed by inmates beginning 1892. When in full swing of production, the factory could produce as many as 720 brooms a day.

With problems from the outset, including a fire in 1873, and multiple recurrent jailbreaks, nearly a quarter of the inmates escaped because of lack of staff and guard inexperience. Of the 44 prisoners accepted in the first two years of operation, 11 escaped. By 1877 the prison was overcrowded. As the prison filled its reputation worsened, and it became less used, being considered more appropriate for those with light sentences. 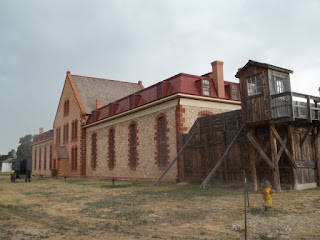 During the 1880s the prison was under capacity, with as few as three prisoners at one time. In 1889, a second cellblock was constructed, expanding capacity to 150 and providing a central kitchen, dining hall, guards' rooms and steam heat. There were at least five cells for female inmates, and several solitary confinement cells. In 1890 Wyoming became a state and the facility was transferred to the new state, which already had planned a new facility in Rawlins.

Prisoners were transferred to Rawlins in 1901, The prison was closed in 1903 and given to the University of Wyoming. The university operated the property to conduct experiments in livestock breeding until 1989. In 1991 the property opened to the public. In 2004 it was established as Wyoming Territorial Prison State Historic Site.

Without photos of the interior of the original factory, historians relied on inventories of prison equipment taken in 1891 and 1897, as well as other written records and photos of other broom factories, to get an idea of how the Laramie Broom Company operated, according to Teresa Sherwood, original curator of the broom factory, quoted in an Associated Press story by Matt Joyce, more than a decade ago. 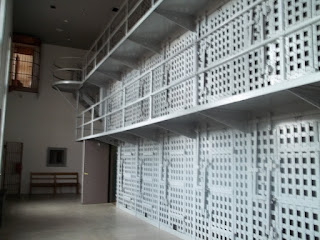 She said the factory was run by a lessee, who bid for a state contract to operate the prison's industries. Revenues went toward operating the factory and helping cover other prison expenses, but the inmates were not paid.

Restoring the building proved to be a challenge, because additional barn space tacked on during the livestock years had to be carefully removed without knocking over the original structure, officials said. The project's directors then wrestled with keeping the building's original materials and structure while following modern safety and access codes. 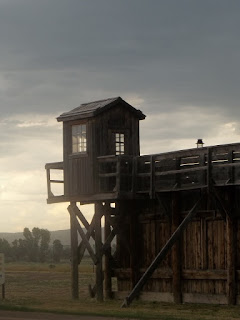