Coast to coast coverage of conflagration 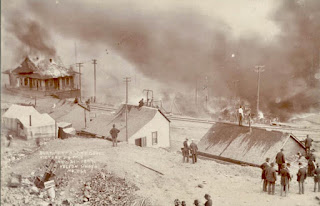 As the town of Victor, Colo., approached the summer's and century's end in the fall of 1899, fire ripped through the prosperous mining village sparing almost no one (millionaires and bums alike) from some form of property damage. Not only did the fire spread quickly and burn out of control that afternoon, but news of the devastation traveled nearly as fast — from coast to coast.

The lead in the New York Times the next day was datelined Aug. 21, and originated out of Cripple Creek.

"Fire has entirely destroyed the business portion of the city of Victor, causing a loss estimated at $2,000,000. Beginning shortly after noon, the fire raged until night, consuming everything its own way. It had its origin, it is thought, in the Merchants' Cafe, adjoining the Bank of Victor. A strong wind from the south fanned the flames, and in a few minutes all the surrounding houses were afire."

and "SCENE OF TERROR," as well as,

In a 'Special Dispatch to The Call' was similar, and probably originated from the same source.

"Fire has utterly destroyed the business portion of the city of Victor, causing a loss estimated at $2,000,000. Beginning shortly after noon the fire raged until evening, consuming everything in its way.

"It had its origin, it is thought, in the Merchants' Cafe, adjoining the Bank of Victor, on the corner of Third street and Victor avenue. A strong wind from the south fanned the flames and in a few minutes all the surrounding houses were afire. Help was summoned from Cripple Creek, but the town had been built in the early days of the camp and was of pine timber for the most part, and burned like paper. "

"Efforts were made to stop the progress of the flames by blowing up buildings in their path by means of dynamite, and all afternoon the hills have roared with the explosions, but the effort was in vain. The fire claimed the Bank of Victor, the post office on the corner opposite, crossed Third street and followed the row of blocks between Third and Fourth streets to the north, taking the Victor Banking Company, the Western Union Telegraph Company's office and the office of the Colorado Telephone Company, the Hotel Victor, on the opposite side of Fourth street, and the three great shaft houses of the Gold Coin Mining Company and its ore bins, among the largest in the Cripple Creek district.

"From there the flames were swept northward by the half hurricane which was blowing, and never stopped until they had taken the Florence and Cripple Creek depot and the fine new depot of the Midland Terminal road, at the head of Fourth street. All the buildings between these are a total loss, with practically all their contents, for the flames were so rapid in their progress that nothing could be saved. The scenes of the great Cripple Creek conflagration were duplicated. Hurrying before the roaring flames went men, women and children, carrying what they could snatch from the flames, racing for their lives."

The Call account noted the use of explosives to fight the fire.

"The crash of buildings torn asunder by dynamite and the crackle of the flames as they consumed the dry buildings hastened their flight, and the pall of smoke added a terror to the spectacle."

A special train was placed at the command of this city by the Florence and Cripple Creek Railroad, and three companies of firemen, with apparatus, were rushed to the scene.

"They worked all afternoon in a vain endeavor to stay the march of the flames. The residence portion of the city has suffered comparatively little, but the business portion is paralyzed and suffering is bound to follow. The burned area may be roughly designated as the space between the head of Fourth street and Victor avenue, extending from the Gold Coin mine buildings on the west to a point near Second street, and down Third street almost to Diamond avenue. The fire was gotten under control this evening. Conservative estimates place the loss at $2,500,000," said the Call's report.

"The first house was built in Victor in October, 1893. In July of the following year the city was incorporated, and five years later it contained 10.000 people. That is about the population now. "

The heaviest losses were, according to special dispatch of the San Francisco Call:

Andrew James Harlan photographed the fires, as did others:

"The fire is reported to have destroyed 14 blocks in four hours; a single portion of brick wall & smoke from smoldering remains are in background. Shows mines and mine dumps, distant background hillsides, and people examining remains of fire debris at center right."

Other historic information differ on some of the details and blames the fire on other ignition points in different locations.

"But Victor’s grand heydays would be dampened on August 21, 1899, when a fire began in a brothel in Victor’s notorious Paradise Alley. Before the blazing inferno was under control, fourteen blocks had been destroyed, including some 800 buildings, causing $1.5 million in damages, and leaving 1,500 people homeless," according to Legends of America.

"As the largest property owner, the Woods Investment Company suffered the heaviest losses, including the total destruction of their bank and the original Victor Hotel. However, Victor’s citizens immediately began to rebuild and within three days the banks and saloons were back in business," Legends says.

"Though the town soon prospered once again, it would be short-lived. In 1900, the main ore vein in the Gold Coin Mine began to play out and the Woods’ profits began to decline. To add to their tremendous debt, heavy financial losses in 1899, and the reduced profits of the mine, the Woods’ Economic Mill burned.  For the Woods Investment Company, the future was looking extremely grim," says reports


"Though they were said to have been worth some $45 million, the company was heavily leveraged and rumors of their impending collapse caused a run on the First National Bank of Victor. Trying to recoup, the Woods Investment Company consolidated its miscellaneous mining properties into the United Gold Mines Company in 1902," said Legends of America. 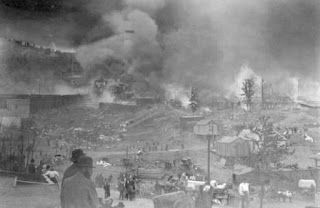 Bird's eye view of Victor, Colorado, during devastating fire on August 21, 1899, taken from vantage point on hillside where many people fled with household goods and personal belongings for safety. Shows horse-drawn wagons and carriages filled with furniture, personal articles and belongings retreating from town; wooden frame houses on fire; and smoke billowing from commercial buildings. 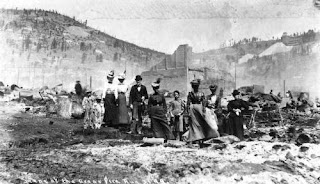 Andrew James Harlan's photo of a group of men, women and children posed in front of ashes and debris of R. H. Atchison's residence, Victor, Colorado, one day after devastating fire of August 21, 1899. 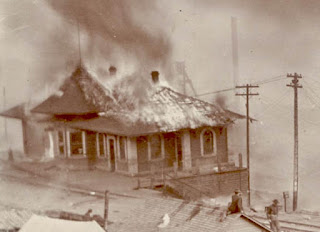 Burning of the newly-built Midland depot on Aug.21, 1899 (closeup print of top photo) by Edgar A. Yelton.