Call me the breeze; I keep blowing down the road

"You find out the strength of a wind by trying to walk against it, not by lying down." 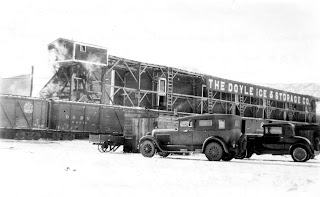 Adjust your sails for a change in direction

By Rob Carrigan, robcarrigan1@gmail.com
The closer to the edge, the more the wind blows. Most of the time, I try to "be the wind." Living in Wyoming as I did, and later on the Palmer Divide, one becomes accustomed that particular natural phenomena. Sort of like Evel Knievel, I learned to love the feeling of fresh air on my face and the wind blowing through my hair. Even when there was more of it.
The Palmer Divide wind could be dangerous and destructive. Wind blow-ups — legendary.
Traveling south out of downtown Denver and  over the Palmer Divide, the elevation increases by more than 2,000 feet.

"When the wind rocks this ridge out of the north, snow amounts can be huge compared to other locations," says CBS Denver.

"A north wind is an upslope flow for the Palmer Divide, which helps to enhance precipitation."

Twice during the half century of ice harvesting on the lake in Monument, high winds destroyed the ice houses where the blocks where stored. 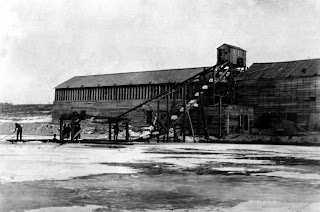 Once, on Dec. 31, 1909, a 75- to 100-mile-an-hour west wind destroyed the icehouses on the day before the harvest was to start. The structures were rebuilt. Then, again, in 1943, another west wind blew down the icehouses, heavy timbers and all. It was reported that 2” x 4”s from the icehouse were embedded in the side wall of a house on Second Street. Photo above at top is the second Doyle icehouse, about 1930. The second photo is of the first icehouse on Monument Lake.
“A god-awful strong wind came through this part of the country and it blew parts and pieces all over the place,” recalls Bill Simpson. “For years afterward, anytime someone had a flat tire where they picked up a nail or chunk of metal, they would turn the blame to those icehouses.”
The high winds came before, of course,  to Monument on Jan. 4, 1916. 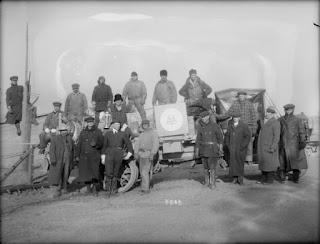 Workers dressed in winter clothes pose on a Mountain States Telephone and Telegraph Company truck in Monument in El Paso County.  Wires, equipment, and a lamp hang from the truck with a sign reading: "American Telephone and Telegraph Co. and Associated Companies, Long Distance Telephone, Bell System." A worker hangs from a telephone pole in the distance in these Colorado Historical Society photos from  Mountain States Telephone collection. 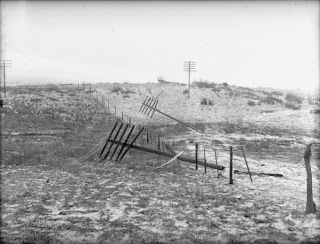 View of broken utility poles in a field in Monument, with telephone wires are draped on the ground, shows a barbed wire fence and open field. 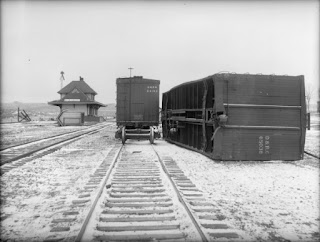 In the same storm, a Denver and Rio Grande Railroad Company railroad car tipped over on the embankment in Monument. The Monument train depot is in the distance. 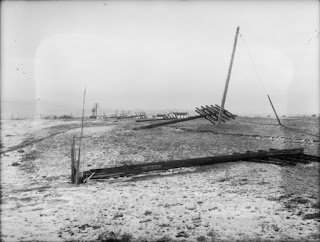