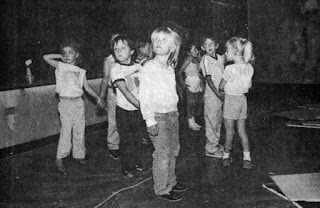 I thought of evil winds and angels.

Today the wind blew with force and power. It doubled over trees and sent trash, cans and all, bouncing down the street. It reminded me of my Wyoming days and I thought of evil winds and angels.
I had to fight wind 30 years ago on the way to the high school to meet up with the track coach in Saratoga, Wyo. I was working on a preview story before they left for the state track meet in Casper early the next day. When I arrived that Friday afternoon, the coach was shaken.
Miles away on the western edge of the state in Cokeville, Wyo, 154 students in addition to teachers, school workers and others, were held hostage in a 30-by 30-foot elementary classroom. Hometown Saratoga competed against Cokeville’s students on occasion.
In Cokeville that day, David Young, 42, and his wife Doris, 47, had pulled their white van up to the Cokeville Elementary School in the middle of town and calmly unloaded three gasoline bombs, nine handguns and four rifles into a grocery cart at about 1 p.m. on a Friday afternoon and then herded everyone into the cramped room.
David Young, the former Cokeville town marshal, had been fired eight years before for being overzealous, according to Time magazine, and was known to dress up like and old-time sheriff and brandish his pistol at the slightest provocation.
“Eventually, Young sent out his demands to the police officers who had surrounded the school. He wanted $300 million in ransom for the 167 hostages he held--students, teachers, school workers, and a UPS driver, nearly a quarter of Cokeville’s population. He also wanted a personal phone call from the president of the United States,” according to an account in “Angels on Earth” by Ron Hartley, a Lincoln County sherriff’s investigator whose four children were among the hostages.
“After 2 1/2 hours of terror, the bomb went off accidentally. Seventy-nine people were injured, but the Youngs were the only ones to die — David Young shot his severely burned wife, then himself,” according to an August 31, 2002 follow-up story by Alan Edwards in the Deseret News about the youngest survivor of the ordeal, Gina Taylor Madsen who was married that fall.
The grocery cart which was full of the three gasoline bombs and outfitted with five blasting caps and a “dead man’s switch,” went off when Doris Young momentarily forgot her husband had rigged the switch to detonate by raising her wrist above her head.
“We will seeing those poor kid’s injuries for years,” worried the Saratoga track coach at the time. But fortunately, most of hostages injuries were relatively minor.
I recall reports in the Casper Star-Tribune, Denver Post, Associated Press and other media that related an account of the children held hostage in the room. The swirling stories reported that those children passed the time making drawings that seemed to depict angels. Several of the children, swore “guardian angels” reduced their fear and protected them through the Cokeville horror. The book “Closer to the Light: Learning from the Near Death Experiences of Children,” by Melvin Morse also recalls the “angel incident.”
Susan Fiscus, who when contacted several years ago, served as webmaster of cokevillewy.com, says the town has moved on.
“I personally, did not live here at the time, and most of those people who lived through the experience are somewhat reluctant to share information about it,” she said. “One gentleman whose wife was a teacher and also had children in the elementary school is trying very hard to get some type of memorial/museum here in town celebrating the fact that all of the innocents survived. Unfortunately it is somewhat of an uphill battle for him.”
I don’t know if guardian angels do that sort thing — protect the innocents and surgically smite those that are evil. But it was a nice thought — especially today, with such an evil wind blowing.