The Red Dogs of Dolores 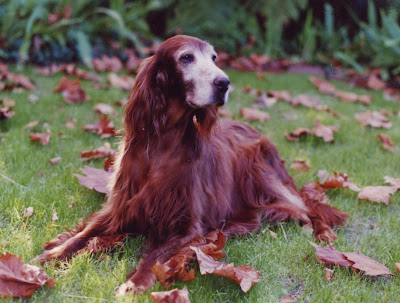 Taylors were more likely to side with the dogs than the customer if a territorial dispute were to arise.

This story first appeared in the Denver Post when I served on their Voices panel in 2004.


There was no sign that officially named it that, but folks in Dolores, Colo., used to call the place the “Red Dog Hardware.” Four or five Irish Setters would lie around on the floor behind the counters all day. Usually, some of them were in the way of customers trying to find a chain saw file or some 80 grit sand paper, but they were easily shooed off to another corner of the 100-year-old Taylor Hardware building.
The store owners, Merton and Cecil Taylor, were more likely to side with the dogs than the customer if a territorial dispute were to arise.
Before it was a hardware store, it had been the old J.J. Harris Bank and the teller cages still separated the office area from cabinets full of T-hinges and rows of Gerry cans, fender washers, claw hammers, sisal rope and Mile High Grass Seed Mix.
Jason was the youngest and biggest of the big red dogs in the ‘80s and usually hung out by the coffee pot in the teller cage hoping for a stray doughnut or chocolate-covered bear claw. Occasionally a customer would scare him off for a few days by giving him a pinch of Copenhagen snuff. His begging tendencies were put on hold after he snorted and drooled all over oak floors from the snuff but in few days, he would be back begging again until the next round of snuff-and-drool.
When taking deposits to the bank several blocks away, one of the dogs (usually Jason) would carry a zippered bank bag in its mouth all the way inside to one of the tellers. The bank employees probably complained privately about having to deal with the dog-slobbered bank bag but would wait patiently for a human from the store to come down and finish the paper work. The hardware store owner sat on the bank’s board of directors so red dog delivery was just fine in this town.
In the summer, the dogs would lay out in the sun on the sidewalks near the flats of tomato plants and onion starts. Jason would attend to his “local politics” from about 8:30 to 9:30 a.m. every morning but would never have to worry about any leash law legislation.
In the evening, two or three of the older dogs would have to be helped into the old blue International Scout. The Scout’s driver seat would be flipped forward and the old dog’s front paws would be lifted up to the floor boards. Then, the the back end the dog would be lifted and pushed forward a little to the back end of the vehicle. Then the process would be repeated again for the next oldest and the next. Finally, Jason would jump in on his own volition, with only an occasional yip and then growl and snapping of teeth as the one dog landed on another.
Most of the dogs would live to a ripe old age. Upon each of their deaths, Merton, the store owner would hire a carpenter to build a pine box, dig out his map of where the other dogs were buried over the many years of having dog friends, and using mason line and permenent landmarks, find and dig a final resting place for the animals. Merton Taylor would then say a few words and send the dog down the path to eternity. Jason’s funeral was one of the saddest.
The hardware store burned, nearly to the ground, on the day after Christmas in 1984. Later when Merton died in his own ripe old age (In his 90s), one of the photos they used at the funeral was of him and a young red dog, perhaps Jason, back in better days when they were both more of a pup. I don’t think he would have minded at all if they got out the map and mason line.
Posted by ___ Restless Native at 5:09 PM

This story brings back a lot of memories . I worked for Merton Taylor back in about 1970 and for sure not only the customers , but also the employees would have to be careful not to ruffle any of the dogs. I would often be sent next door to the mercantile store for a couple packages of ground beef for the dogs . The packages would be wrapped in brown butcher paper as usual.. At times , Merton would send me in the old scout over to Pleasant View for a couple hundred pounds of new pinto beans and I would have to take a dog or two with me for a ride. The dogs didn't like going into the back building where I would occasionally mount tires or fix flats, but if Merton was to go back there or to the old long building on Railroad ave for a length of winch cable , the dogs would always follow him . Merton had a long stride and was hard to keep up with but the dogs loved the walk.