Fear's power and the threat's proximity 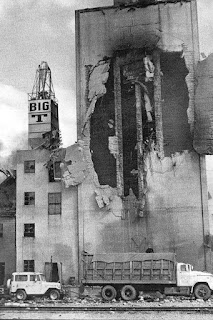 “If you're not haunted by something, as by a dream, a vision, or a memory, which are involuntary, you're not interested or even involved.”
― Jack Kerouac, Book of Sketches

Close calls in our own back yard

We tend to measure fear by how close it comes to us. If some thing threatens — especially in our own backyard, next door, or even down the street, we pay attention. That applies to the street near my house, on which I drive everyday to work.


"This town, known as Colorado’s Sweetheart City, had a little more sweetness than it could handle Friday," read a wire piece in the Los Angeles Times February 16, 1990, when the large storage tank exploded sending Molasses into the neighborhoods around the the Western Sugar Company in Loveland, Colorado.

"A molasses storage tank sprang a leak before dawn, spilling its gooey contents onto city streets and an industrial park. The molasses, stiffened by near-zero temperatures, flowed slowly and more than a foot deep about one-half mile down a city street. City officials estimated that about 100,000 gallons spilled from the tank, which was at an old sugar factory."

It called to mind a much more devastating accident in the Boston area nearly 100 years ago.

"Around lunchtime on the afternoon of January 15, 1919, a giant tank of molasses burst open in Boston’s North End. More than two million gallons of thick liquid poured out like a tsunami wave, reaching speeds of up to 35 miles per hour. The molasses flooded streets, crushed buildings and trapped horses in an event that ultimately killed 21 people and injured 150 more. The smell of molasses lingered for decades," wrote Emily Sohn for the History Channel.

"Already pinned down by fallen buildings, some victims then became stuck in molasses. The liquid was a foot deep in some places. At least one person died by asphyxiation hours after the accident, Sharp says. Rescue efforts would have likely been easier, she speculates, if the accident had happened in the heat of July and the molasses had been able to spread further out from the tank."

Seems like an uncommonly cruel way to go, to me.

Fortunately, the Loveland spill was not nearly as catastrophic. On February 16, 1990, when the large storage tank exploded sending Molasses into the neighborhoods around the the Western Sugar Company in Loveland, Colorado. It was a sticky mess even covered by the national news but no reported deaths.

Though, we are not always so fortunate.

"On Sept. 26, 1973, an explosion trapped workers atop a grain elevator in Loveland, Colorado. Authorities summoned a helicopter to help rescue workers from the roof of the Big Thompson Mill and Elevator. The explosion destroyed a section of the "Big T" structure from levels three to seven. The section measured 25-feet in width. The Loveland Fire Department received mutual aid from the fire departments in Berthound and Fort Collins." according to Loveland Fire Rescue Authority archives.

“A devastating explosion ripped through the Big Thompson Mill Grain Company Elevator in downtown Loveland Wednesday afternoon, killing two men and injuring five. The explosion, which occurred at about 1:45 pm, Wednesday, blew out the concrete side of the 90-foot structure and large chunks of concrete and other debris were thrown a block away. …" reported Mike Peters, Tribune Staff Writer.

" F. J. (Bud) Westerman, owner of a clothing store located less than 50 yards from the elevator, at 565 N. Cleveland Ave, said he thought the blast was an earthquake at first. … There was concern for a while that the 70-year-old elevator would collapse, and spectators were cleared from the area. The building was leaning toward the west, but Westerman said it has always “listed” a little. ….” Greeley Daily Tribune.  September, 27, 1973. 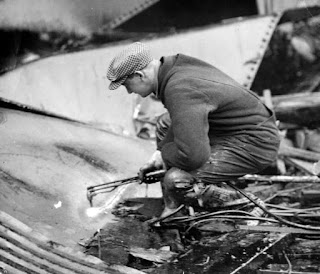 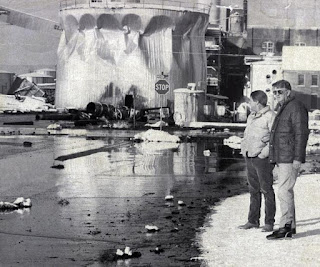