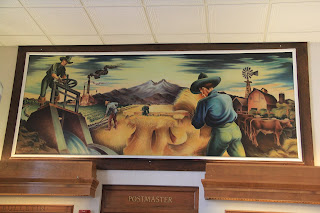 "I realized the bohemian life was not for me. I look around at my friends, living like starving artists, and wonder, 'Where's the art?' They weren't doing anything. And there was so much interesting stuff to do, so much fun to be had ... maybe I could even quit renting."
__ P. J. O'rourke

If you wander into any of 15 select post offices in Colorado, you can still see the remnants of a 1930s "New Deal" project to diminish artists' stress at the time — namely, the 'starving' part.

Here in Loveland, Iowa-born artist Russell Sherman painted it as he saw it at that time, "as a farming community in the shadow of Long's Peak, where bumper crops of golden grain was harvested; where sugar beets nourished by snow-fed mountain streams turned into irrigation canals, were processed in the sugar factory; where beef cattle munched their way to oblivion; where barns and farm houses spoke of the goodness of life," wrote local historian Zethyl Gates in the Loveland Reporter-Herald in 1979.

While painting the mural, Sherman and his wife lived in a cottage near Estes Park. He also painted a mural for the Rocky Mountain National Park agency in Estes Park, and later illustrated books and created a number of murals and lithographs representing the Western Scene.

"Sherman loved the West and his style compares favorably with that of other artists of the Regionalist movement championed by Thomas Hart Benton, himself and active naturalist who depicted small town rural life. It is interesting to note that Kenneth Evett studied under Benton, and painted a similar mural in the Golden Post Office," says Gates. 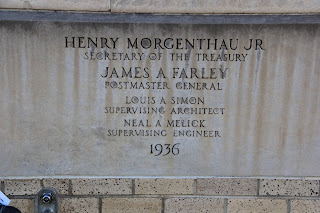 "Throughout the United States—on post office walls large and small—are scenes reflecting America's history and way of life. Post offices built in the 1930s during Roosevelt's New Deal were decorated with enduring images of the 'American scene,'" wrote Patricia Raynor, more than two decades ago for Smithsonian National Postal Museum.

"In the 1930s, as America continued to struggle with the effects of the depression, the federal government searched for solutions to provide work for all Americans, including artists. During this time government-created agencies supported the arts in unprecedented ways. As Harry Hopkins, Roosevelt's relief administrator said in response to criticism of federal support for the arts, "[artists] have got to eat just like other people," Raynor said.

Often mistaken for WPA art, post office murals were actually executed by artists working for the Section of Fine Arts. Commonly known as "the Section," it was established in 1934 and administered by the Procurement Division of the Treasury Department. Headed by Edward Bruce, a former lawyer, businessman, and artist, the Section's main function was to select art of high quality to decorate public buildings—if the funding was available, Raynor wrote.

Edward Bright Bruce managed the Public Works of Art Project (PWAP), the Section of Painting and Sculpture and the Treasury Relief Art Project, New Deal relief efforts that provided work for artists in the United States during the Great Depression.

Ned Bruce was a successful lawyer and entrepreneur before giving up his career altogether at the age of 43 to become an artist. However, like most artists during the Depression, he found it impossible to make a living making art, and grudgingly returned to business in 1932 as a lobbyist in Washington for the Calamba Sugar Estate of San Francisco. In 1933, President Franklin D. Roosevelt received a letter from the American painter George Biddle, who suggested a New Deal program that would hire artists to paint murals in federal office buildings.

Roosevelt liked the idea, and brought it to the United States Treasury Department, which oversaw all construction of federal buildings. Bruce had by that time made some connections in Washington, and he was asked to help organize the effort. By the end of 1943, all of the New Deal art programs had been shut down following Bruce's death.

Murals produced through the Treasury Department's Section of Painting and Sculpture (1934–43) were funded as a part of the cost of the construction of new post offices, with 1% of the cost set aside for artistic enhancements. Murals were commissioned through competitions open to all artists in the United States. Almost 850 artists were commissioned to paint 1371 murals, most of which were installed in post offices; 162 of the artists were women and three were African American.

The Treasury Relief Art Project (1935–38), which provided artistic decoration for existing Federal buildings, produced a smaller number of post office murals. TRAP was established with funds from the Works Progress Administration. The Section supervised the creative output of TRAP, and selected a master artist for each project. Assistants were then chosen by the artist from the rolls of the WPA Federal Art Project. 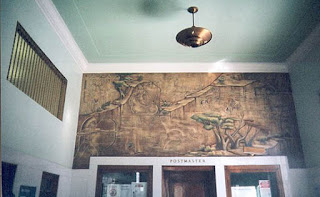 Section of Fine Arts mural entitled “Hunters, Red and White” painted by Archie Musick for the Manitou Springs post office in 1942.
A plaque near the mural reads: “Depression-era public art programs coincided with the heyday of Colorado Springs’ art school, the Broadmoor Art Academy: Its students and teachers painted murals in federal buildings nationwide. For Manitou’s post office mural competition, my father, Archie Musick, depicted the legend of Manitou’s springs: ‘the God Manitou in a fit of rage clubbing a quarrelsome chief.’ His frieze of Indian-trapper life across the bottom of the submitted sketch was so popular with ‘the brass in Washington…they told me to dump the main design and blow up the frieze to fill the entire space.’ Painted when many federal murals were nationalistic – just months after Pearl Harbor – this mural’s ambiguity and unusual dry-pigment/glaze technique are distinctive: ‘Hunters Red and White” embodies some historical suggestions from his friend, author Frank Waters – Manitou’s first cabin, explorers Pike and Fremont – but mostly Archie’s own inspiration from fantasy, pictographs, artist friends (including Japanese-American artists sheltering here), and the beloved local rocky landscape.” 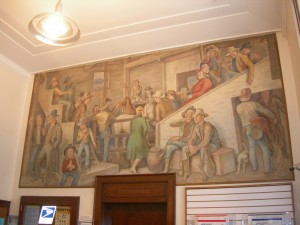 Boardman Robinson’s “Colorado Stock Sale” mural still occupies most of a wall in the Englewood post office lobby. The post office was threatened with closure in 2010 but was saved after an outcry from local residents and preservationists.
Image by Broadman Robinson, Date:1940 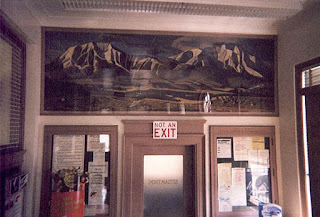 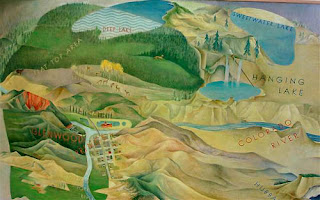