Cripple Creek haunting story is one for the books 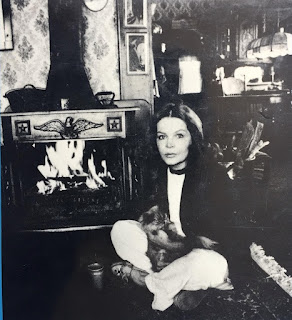 Local historian and publisher Leland Feitz sometimes would pop in on us afternoons, at the large office downstairs at the Courier, and tell a story or three. At times it was about history, or hauntings, or possibly both.
A favorite of mine, was about the house he once owned and later sold to bestselling American astrologer and poet, Linda Goodman. She is notable as the author of the first astrology book to make The New York Times Best Seller list.
Goodman, (real name Mary Alice Kemery) who died in 1995, but published multiple astrological and metaphysical books during her lifetime —to the point of being described as responsible for accelerating the growth of the New Age movement through the unprecedented success of her first astrology book Linda Goodman's Sun Signs in 1968 — told stories of apparent psychic manifestations from the first night she rented the house on Carr Avenue in Cripple Creek from Leland in the summer of 1970.
"... The Carr house, which she later bought and renovated, from local publisher and historian Leland Feitz, and while the night time streets of Cripple Creek seemed eerily quiet compared to those of Manhattan, the situation inside the house was just the opposite," according to writer Chas Clifton, in his account "Ghost Tales of Cripple Creek."
"When Ms. Goodman tried to sleep, she kept being awakened by the sounds of music, by voices of people singing and talking, in particular a man and a woman singing duets. She was convinced that Feitz, her landlord, had left a radio playing somewhere in the house. She checked the laundry room, the kitchen, even the basement, but the sound always seemed to come from somewhere else in the house," wrote Clifton, author and historian who specializes in the fields of English studies and Pagan studies and holds a teaching position in English at Colorado State University-Pueblo, prior to which he taught at Pueblo Community College.
"I was getting aggravated," Goodman is quoted. "I went outside to see if the neighbors had a TV or stereo on." They didn't. "On my honor to God, when I went to sleep I had to put a pillow over my head to muffle the sound."
She reported later that she and her house guests had heard the mysterious talking, singing and laughing and music as many as six additional times. At least a dozen people told her of hearing a baby crying in the middle of the night, while one guest told her of seeing an apparition of a man in military uniform in the living room.
The house at 315 Carr Avenue was built in the 1890s as a replica of a two-story brownstone row house by a Jewish business man who came from New York City to open a dry goods store. In addition to being a private residence, it served as a mining company office, and later, for a short time, a brothel, associated with a Bennett Avenue hotel following the demise of the red light district. Recently, it was known as a Bed and Breakfast Inn called the Last Dollar Inn.
Goodman's books also reference what she referred to as the "disappearance" of her eldest daughter, Sally Snyder in the 1970s, and the mystery around her reported death. Linda Goodman spent much money and many years trying to find Sally, long after police closed the case as a suicide or accidental suicide. Goodman never accepted the official police report and continued to search for Sally for the rest of her own life, according to reports.
Feitz died back in February of 2013, but was a real, down-to-earth Colorado native, born in La Jara, Colorado on Saint Paddy's Day in 1924 and was a resident of Colorado Springs since 1942, when he came to Colorado Springs to attend Colorado College. Feitz followed a career in public relations and advertising. He worked for 18 years for the Alexander Film Company, a Colorado Springs firm prominent in the field of movie advertising. Feitz as a young man held top jobs in agencies of New York City and Chicago. Later, in the Springs he worked for several advertising and printing firms, the last being Graphic Services.
Feitz's real interest was history and in 1967 at the advice of a friend began to write and publish concise history booklets about Colorado people and places. His Little London Press was established in 1973 and published over forty Colorado history booklets by various authors, including Chas Clifton's "Ghost Tales of Cripple Creek." Twenty of the titles were written by Feitz himself, several about the Cripple Creek Mining District. Colorado titles included books on Victor, Creede, Platoro and the Conejos County. And there were popular pictorials on Cripple Creek, Colorado Springs and Pueblo as well.

Photo Info:
Linda Goodman in the house on Carr Ave. in 1970.

Photo of Leland Feitz, from his obituary in Colorado Community Newspapers in 2013. 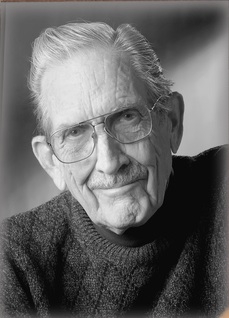