Long view from high in the Cottonwood tree 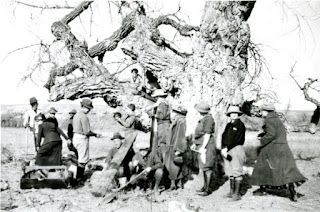 A huge gnarled Cottonwood tree, 100-feet-tall, and more than 16-feet-around the trunk, looked out from its sandy perch on plains — with a long view all the way from the mouth of the Cache La Poudre River and south, to Big Thompson Canyon. The tree positioned northwest of Timnath for nearly 100 years in northern Colorado, was strategic because of that long view and Cheyenne and Arapaho tribes found it a convenient meeting place for councils and more.

"Mrs. A.K. Yount, a pioneer lady of Larimer County was the first to give an authentic account of the tree," According to Loveland historian Zethyl Gates. "She was acquainted with Chief Friday of the Arapahos, and he told her, 'We meet there.'"

"Another pioneer woman, Mrs. John Rigden, who lived near the Council tree as a child, told of playing under it. She recalled seeing pieces of cloth tied to the top branches, where at one time, the body of an Indian woman had been placed on a burial scaffold in the tree," Gates wrote in "The Pioneering Past of the Thompson Valley."

"Not long after the Indians had been removed to Wyoming, a party returned and took the body of the squaw, together with other bodies from burial trees near La Porte, Colorado to Wyoming. The pieces of the cloth remained until the storms of passing years broke the thongs holding the platform together and whipped the strips of cloth to shreds. Branches bent down in growth by weight of the platform were still visible, (years later) according to Mrs. Rigden."

A number of Native American tribes used a burial tree as the last resting place for a dead relative, either as a regular practice (along with a scaffold) or as an alternative to other methods, such as a ground burial.

The corpse was wrapped up carefully in a bison robe or blankets and either placed in a fork of the tree or tied to a heavy branch. Both grown persons and small children were laid to rest in this way.

"Early settlers of the valley noticed the custom of placing the dead on platforms in the tall cottonwoods," wrote Gates.

"In 1860, a massive cottonwood tree stood in a broad, lush meadow near the Cache la Poudre River’s banks and served as a meeting place for Chief Friday and his band of Northern Arapahoes. It would later become a symbol to white settlers of Native American life, and known to them as the Council Tree. Also in 1860, George Robert Strauss settled about a thousand feet downstream from the tree. At that time, the area along with all the land between the Arkansas River and the North Platte still belonged to the Northern Arapaho as determined by the 1851 treaty," according to the The Cache la Poudre River National Heritage Area's site about the nearby Strauss Cabin and the Council Tree.

"Today, the cottonwood is long gone. The Great Western Railway bisects what used to be the flat, lush meadow. Directly to the west is a gravel-mined pond. To the south are more gravel-mined ponds. Just beyond the Poudre to the east, four lanes of Interstate-25 traffic whines, whooshes and roars. All that seems to remain of the former valley of 1860 are the river and the view of the white-capped Rockies," says the Cache La Poudre NHA site.

In such a transformed landscape, what can written descriptions of the early explorers and settlers tell us about the landscape that the Native Americans enjoyed before being forced off the land.

Ansel Watrous of the Fort Collins Express Courier tells the story of the times.

“The waters of the river were as clear as crystal all the way down to its confluence with the Platte. Its banks were fringed with timber not as large as now, consisting of cottonwood, boxelder, and some willow. Its waters were full of trout of the speckled or mountain variety. The undulating bluffs sloped gently to the valley which was carpeted with the most luxuriant grasses. … In coming up the South Platte River they struck the mouth of the Cache la Poudre River at noon, and on the evening of the first day’s travel on that river they camped. Game was plentiful, herds of buffalo were seen on the plains, as well as deer, elk, and antelope. To the travelers the Poudre Valley appeared to be the hunter’s paradise. Trout were caught then along the Poudre River from its mouth to the foothills, and the small streams in the mountains were alive with them," according Fort Collins Museum of Discovery.

Northern Arapaho chiefs White Wolf and Friday, and their bands, gathered in the Cache la Poudre River Valley in the summers of 1863 and 1864, as tension grew.

“Chief Friday implored the U.S. government to set aside land for his people on the north bank of the Cache la Poudre, extending from Box Elder Creek to the South Platte River and reaching as far north as Crow Creek. U.S. Indian Agent, Simeon Whitely advised against this, as it would have required relocating sixteen non-Indian families living along the river in the proposed area. As the government negotiated with the Indians, homesteaders were busy excavating ditches, buildings shelters, planting crops, and transforming the land,” writes Lucy Burris in People of the Poudre: An Ethnohistory of the Cache la Poudre River National Heritage Area AD 1500-1880.

“By 1869, Friday had joined the rest of the Northern Arapahos under Medicine Man in Wyoming, giving up hope for a reservation on the Poudre. In January 1870, Washakie, the Shoshone Chief on the Wind River Reservation, allowed the Arapahos temporary accommodation. By 1878, a permanent place was made for the Northern Arapaho at Wind River. Friday died on the Wind River Reservation in 1881,” says Burris. 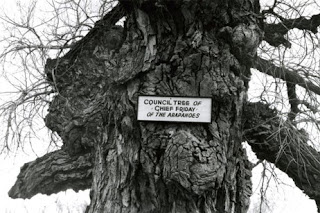