Search for the truth depends on the storyteller 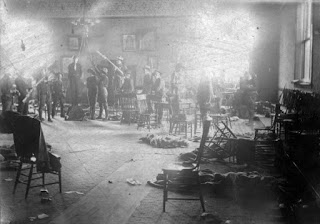 Preparing for a lynching, photo taken 1904.


Colorado National Guard soldiers prepare to lynch a man during the labor strike in Cripple Creek, Colo., throughout the room many hold rifles with bayonets. One National Guardsman holds the end of a rope that is slung over a light fixture and knotted around a man's neck. The victim may be Sheriff Henry Robertson. He stands on a chair with his hands behind back. Chairs are scattered throughout the room. Hand-written on envelope. "C-Military,Strikes, Cripple Creek, 1903-04."Colorado Historical Society, Original Photographs Collection.


Take a step back, look at passion involved

This week, after marking the Labor Day holiday, it strikes me as important to step back and take a look at the passion involved in previous labor fights here in Teller County. The district was watched by the rest of world when violence broke out and martial law was declared early in the last century. Western Federation of Miners and labor strife at the turn of the century in Cripple Creek and Telluride became emblematic for labor unrest around the country, and the world watched.

But it is also true that you can’t take that look without the constraints and filters of considering who is telling the tale. As always, there is at least two sides to every story. That point was brought home to me by the attached photo.

Historian Marshall Sprague and others called it "the Black Time." Sprague referenced the events depicted above this way in Money Mountain:The Story of Cripple Creek Gold, after the dynamiting of the Independence rail platform killed 13 non-union miners and injured scores more.

"Clarence Hamlin, of the Mine Owners' Association, called a mass meeting at 3 p.m., Monday (June 6, 1904). As early as noon, gold camp resident began converging on Victor. Hamlin and others persuaded Sheriff Robertson, a W.F.M. sympathizer, to resign. Their persuasion was the threat to hang him. Ed Bell became sheriff."

Emma Langdon, of the Victor Record and author of The Cripple Creek Strike, noted that on Sunday, June 5, the day before, Sheriff Robertson had issued a statement outlining his objections to Governor James Peabody declaring martial law in the district.

From Teller County Sheriff H.M. Robertson statement, (before the threat of hanging by the National Guard soldiers):

"TO THE PUBLIC - The commission sent by the governor of the state of Colorado to investigate the strike situation in Teller county, called me at midnight Thursday, the 3rd inst. I went to the National hotel at Cripple Creek, and reached there about 12:30 a.m. Friday morning Sept. 4. I was with the commission about two hours and fully explained the situation. I stated to the commission I had the authority to employ all the deputies I needed; that I had the situation in hand; that I had made arrests and was going to make more; that there was no trouble. Within three hours after I left the commission, the members thereof departed for Denver. There is no occasion for militia here. I can handle the situation. There is no trouble in the district and there has been none. No unusual assembly of men. Saloons closed at midnight. The sending of troops here is a usurpation on the part of the governor. I believe the action of the governor will have much to do toward injuring the district to such an extent it will be a long time before recovery will be had. As sheriff of Teller county, I do solemnly protest against the militia being sent here at this time." 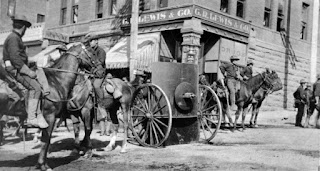