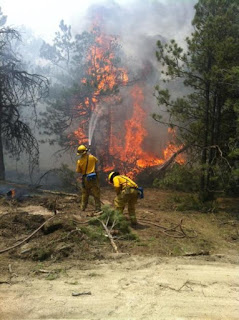 Connecting with all the people that are alive


I have always lived locally, but at times, think globally. Every now and then, in this world that can isolate us from other forms of human kindness, we need to embrace the automatic compassion response that usually kicks in for a country beset by tragedy, disaster and discord.

“There’s been so much ugliness, division and fear on our screens and in our hearts over the past two years that it was getting hard to imagine how we’d ever stitch the country together again.,” notes Time magazine columnist Susanna Schrobsdorff. “Then a once-in-a-thousand year storm hit.” Referring to Harvey. And the acts of kindness followed.

“They are a reminder of something we feared extinct: that aspect of America that brims with compassion -- the kind that doesn’t discriminate.”

Locally, we have seen folks come together in trying times. Think only of the firestorms of Waldo Canyon, Black Forest, and even Hayman, the flooding and destruction of Fountain Creek in the Ute Pass, Manitou Springs, and along Colorado Highway 67, and out in the burn areas in the forest.

But remember as well, the response, the compassion and the humanity shown as local folks and others rose to the occasion. And are still rising, because there are still things to do.

The fire in Cripple Creek last week that left folks without. Anything. Earlier disasters, large and small, here close to home and abroad, we have suffered through.

Born of floods, following fires, one local organization philosophically and metaphorically, has held up like a three-legged table, the Coalition for the Upper South Platte (or CUSP), now serves as a model, and has for years ... statewide, nationally and internationally.

Through the three legs: economic sustainability, community values, and cooperative efforts of the stakeholders; CUSP seeks to protect the water quality and ecological health of the Upper South Platte Watershed, that began after the Buffalo Creek Fire and Flood (which did more than $35 million in damage resulted in two deaths) in Jefferson County 1996.

Black Forest Together (BFT), an organization formed about four years ago, also has a three-pronged strategy of compassion: recover, rebuild, restore.

It will likely be sponsoring its Annual Fundraising Event in October, at the Black Forest Community Club (NW corner of Shoup Rd & Black Forest Rd). The event commonly includes a BBQ dinner, activities for the kids and music.

The purpose of the fundraiser is to raise operating capital to pay the expenses related to BFT’s community projects of recovery, mitigation, preservation, preparedness, and education. In order to hold a successful fundraiser, they need a number of volunteers to assist with the event, serving food, setting up and cleaning up and other tasks. If you have any questions, about that effort, please call the office at 495-2445.

In the meantime, if you need help, Do you have trees blown over from our recent storms? Burned property still requiring cleanup? Out of control slash you need help with? If so, Black Forest Together (BFT) is taking applications for this season’s projects. Project focus will be continued post-fire cleanup/restoration and mitigation to reduce the risk of another wildfire. Although they don’t have the capability to cut down trees, we can help with chipping, slash piling, cleanup of debris, seedling planting and other restoration work and offer neighborhood chipping projects.

Certainly other local organizations (too numerous to name) share in that uplifting effort.

The fires in Montana, Washington, Oregon, Idaho, California, Utah, Wyoming, and Colorado are everyday reminders of the need for vigilance, and the truth that we may one day need help again. The recent national tragedies in Texas, Florida, Puerto Rico and the U.S. Virgin Islands drive that message home.

Empathy is an important and motivating response for us. Perhaps pain and heartbreak are all part of the human condition, and such suffering might seem unprecedented, but at the same time, as James Baldwin suggests, it connects us with all the people who are alive -- all the people who have ever been alive. 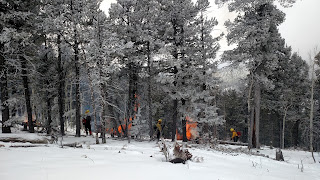 Photo information:
1. Fighting the Black Forest Fire in the first few days of July, 2013.
2. Coalition for the Upper South Platte with a winter-time controlled burn in 2015.