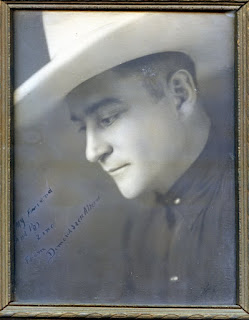 Though it would be tough to go through prohibition once again, modern newspapers, perhaps unfortunately, don’t deal justice out in the type galleys, quite like they once did.

Take us back to the days of Diamond Jack Alterie, who ran Moonridge Round Up Ranch out on Highway 67, not far from Rampart Range Road, just north of here, in southern Douglas County, as reported in the new book by Castle Rock Writers, Images of America, Douglas County, published by Arcadia Press.

As evidence, the Chicago Daily News story of Alterie’s death, written by editor Robert J. Casey, began: "'Two-Gun Louie'" Alterie came out of the shadows of the alky racket long enough to die. He was shot down — in the technique he himself had done so much to perfect."

A sidebar by Clem Lane, a legendary city editor for the same paper, began: "This it the story of 'Two-Gun Louie' Alterie, one-time pugilist, one-time policeman, one-time robber, one-time lieutenant of Johnny Torrio and Dion O'Banion, erstwhile rancher and union business agent, and today the subject of a coroner's inquest as to who shot him and why not sooner."

Alterie was born Leland A. Varain in Northern California, in Lodi.

The Oakland Tribune on July 20, 1935, reported his death like this:

“Louie (Two Gun) Alterie, Chicago gangster was slain by gunmen there, Wednesday night, as he left his apartment, was a former Lodi youth. Alterie, then known under the correct name of Leland Varain, attended Lodi Schools. He left Lodi about 1918, and since that time has been connected with Chicago gangs.”

The son of French ranchers, Alterie moved to Chicago as a young man. He eventually joined the predominantly Irish North Side Gang, headed by Dion O'Banion. Other prominent North Siders included Earl "Hymie" Weiss, Vincent "The Schemer" Drucci, and George "Bugs" Moran. Alterie was a Western enthusiast who wore a ten-gallon hat and two holstered Colt .45 revolvers and owned the ranch near Sedalia, as well as another near Gypsum, Colorado. In addition, he was a top gunman for the North Side Gang, and he also formed the Theatrical Janitors' Union and used his position as union president to extort money from theater owners across the country.

“He wore diamond jewelry and gave diamonds as gifts. In 1922, Varain was arrested for stealing $50,000 in jewelry . Thus, the nickname “Diamond Jack.” As a member of the O’Banion’s gang, he battled rival Al Capone’s Chicago thugs, before being gunned down on the sidewalk outside his Chicago apartment, while waiting for his wife in the car.

Before that, in 1924, Alterie bought the Round Up Ranch property near Highway 67, and invited his gang leader and friend Dion O’banion for deer hunting and rodeo. O’Banion was gunned down in his flower shop in Chicago in 1924.

Incensed by O'Banion's murder, Alterie publicly challenged his killers to a shootout on State Street. North Side Gang members, including “Bugs” Moran convinced him to spend a cooling off period in Colorado, to avoid unwanted attention from both rival gangs and Chicago officials.

However, he had real trouble, staying out of trouble in the wild, wild west of Colorado.

In November 1932, after a long night of drinking moonshine, Alterie became involved in a shooting in the Hotel Denver in Glenwood Springs, Colorado, and in February 1933, as part of a sentencing agreement, Alterie agreed to leave Colorado and not come back for a period of five years.

“Diamond Jack,” as he was known here, got into a fight with prize fighter Whitey Hutton, and before the evening ended, beat up the hotel porter, and accidentally shot two traveling salesmen for International Harvester. One of salesmen later died, after sentencing for “Diamond Jack,” that required he leave the state. 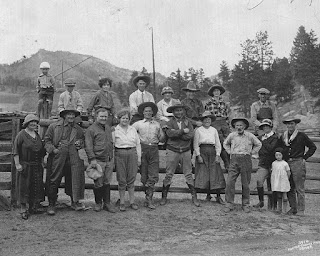 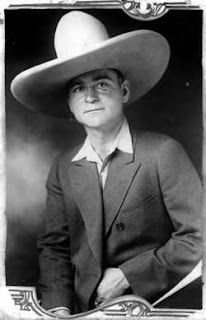 Photo information:
1. Louie Alterie, president of the Theatrical Janitors' Union, from the Al Capone Museum, Chicago.
2. At the Round Up Ranch, about 1924, "Diamond Jack" cools off in Colorado, with deer hunting and rodeo. Gang leader and friend Dion O'Banion is third from left in the front row, cap in hand. O'Banion was murdered in his flower shop in Chicago shortly afterward. Alterie (a.k.a. Leland Varain) is three down, taller fellow in center with his arms crossed.
3.  Following Dion O'Banion's murder, Alterie publicly challenged his killers (including Al Capone) to a shootout on State Street. North Side Gang members, including “Bugs” Moran convinced him to spend a cooling off period in Colorado, to avoid unwanted attention from both rival gangs and Chicago officials.