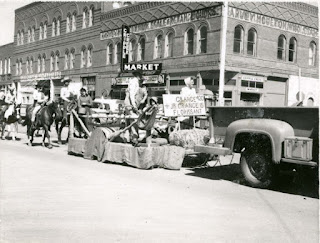 Ghosts, connected to fire, manifest a fear like no other.
When the first terrible fire broke out in Cripple Creek on a frigid, windy night April 29, 1896, six shots, fired in rapid succession rang out. It was the signal for a town lacking the traditional fire bell.
A reservoir, half full and the rest frozen almost solid, was not much help when the volunteer firefighters arrived almost immediately.
"So rapid was the progress of the flames that the people soon became panic-stricken and chaos ensued. Teams of horses and mules were lashed up and down the streets by excited men; people with bundles and papers were rushing pell-mell to the northward; shouts, the booming of flames, the crashing of falling timbers following the explosion of dynamite, all made one ominous, unintelligible roar," reported papers at the time.
The echos of that terrible sound were heard again on March 4, 1977, when a fire of unknown origin began in the Grubstake Hotel (formerly the 50-room Masonic Hall) and known as the Welty Block. Frozen fire hydrants again frustrated volunteer's efforts to douse the flames. Newspapers at the time reported that one wall was dynamited.
Jan MacKell, in her book "Cripple Creek: Last of Colorado's Gold Booms," described the stories that began to emerge afterward.
"Interestingly, one of dozens of ghost stories about Cripple Creek surfaced in the wake of the Welty Block fire. When the wall collapsed, a spiraling column of flames shot upward as at least two firemen heard a woman's screams from inside the empty building. One of them was volunteer Ed Grosh, who swore he heard a woman's voice calling out, 'I'm free! I'm free at last!' In the years since the fire, more and more stories have emerged about the old Welty Block being haunted before its demise. Some even swore they saw the apparition of a woman floating through the smoke. As for June Hack, all he saw after the fire were four donkeys standing at the burned out door of his grocery and looking at the ruins with quizzical expressions. 'That fire devastated us and them,' he said."
Chas S. Clifton, in his 1983 book "Ghost Tales of Cripple," says there were earlier stories.
"For years before the fire, the Welty Block was owned by Ray and Marilyn McLeod, he a former 'crack' gold miner, although it had been sold sometime before it burned. 'Lots of spooky things,' went onin the building, Mrs. McLeod avers — a feeling not shared by the former owners of the grocery store, who say their premises were undisturbed... She tells of almost nightly encounters with 'spooks,' and how something shook her bedframe while her dog growled at the invisible intruder,"reported Clifton.
"I was scared to death half the time we lived there," he quotes Marilyn McLeod.
Guests at the former hotel also reported hearing mysterious footsteps in the corridors, and several claimed they spotted an apparition of a woman in turn-of-the-century clothing 'like Lilliam Russell, the actress."
Crews from Victor and Cripple Creek both battled that night to try and save the Welty Block with the Victor contingent on the street side and Cripple Creek department in the alley.
Longtime district mainstay Ray Drake, who was on the Victor crew. Clifton reports, "After the walls had fallen and the battle to save the Welty Block was clearly lost, Drake said, one of the Cripple Creek men, someone who hadn't lived too long in the District, came up to him. 'Someone died in there,' the fireman swore, 'I heard screaming.'"
Drake knew the building's history — and he also knew its apartments were uninhabited, the gas and electicity turned off.
Ed Grosh, a member of the Cripple Creek Volunteer Fire Department that night who was later contacted by Clifton at his new home of Inyokern, California, reported what he heard that night as the rear wall and roof collapsed, sending a vortex of flame spurting hundreds of feet in the air.
Swearing that he heard a woman scream, but not for help.
"I'm free! I'm free at last," is what Grosh said he heard.
Fire conjures a fear like no other.
###
Photo Information: Welty Block in early 1970s, during a Donkey Derby Days parade. The building was destroyed by fire in March of 1977. 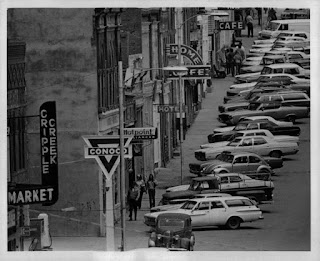 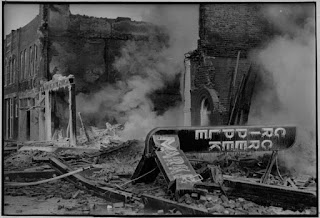 My father was there that night, too.
I'm curious. How long ago did you speak to Ed Grosh? We've been trying to find him for years. Can you contact me at bridgeloop1937@yahoo.com?

My father was there that night, too.
I'm curious. How long ago did you speak to Ed Grosh? We've been trying to find him for years. Can you contact me at bridgeloop1937@yahoo.com?

I was there. My house was at the top of 3rd Street and I was having a quiet after dinner drink, when a glow from downtown caught my attention. The fire had not broken through the roof so it just looked really odd, but curiosity got the best of me so I drove downtown and joined a horde of people standing around in horror. Someone was moving around in Hack's store when I got there, and I think it was June getting the cash out of the draws and whatever else he could salvage on short notice. They blew the west wall on the building uphill from the Welty building to keep the fire from spreading to the Court House. 3 buildings were lost in the fire, the biggest of which was the Grubstake. Later, I was able to retrieve bricks from the site for a fireplace at my house.