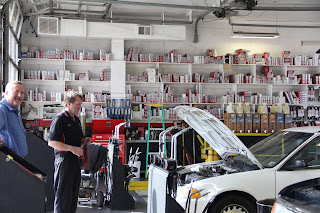 It has been a study in family, and business, and community. How do the elements intersect and change, grow and develop over time? It is the local demographics of identifying the moving  target of Monument and the Tri-Lakes area.
Rocky Mountain Car Wash and Lube Center, with manager/owner John Savage has been right on the northwest corner of the main intersection of that study for the last 20 years.
"When I decided to leave the corporate world to fulfill an entrepreneurial dream, the corner of Hwy 105 and Second St. was occupied by a one-hour photo and a self-serve car wash. Second St. did not join Hwy 105, the bridge was only two lanes wide, and a single stop sign regulated traffic," Savage said.

He started forming that vision of Rocky Mountain Oil Change Center, at least as far back as 1994.
"Working for a major oil company for 17 years, I assisted numerous lube center entrepreneurs by providing demographics, site development, building plans, equipment financing, and marketing assistance, all the while dreaming of opening my own lube center one day," he said.
The Savage family realized their dream on Sept. 7, 1995 when Rocky Mountain Oil Change Center opened for business.
"The whole family has taken part in the day-to-day operations of the business," he said.
Dana, John's wife, helped design the lobby, and worked on publicity and advertising. Each of his children took interest in the business operations. Jennifer, the oldest of seven children, helped with bookkeeping; Tiffany, Dustin, Melissa, Joshua, and Caleb worked on cars and built customer relationships; and Caroline attracted business with her shopping cart ads since she was an infant.
Now, John Savage's seven children (with seven grandchildren) are professors, economists, engineers, business executives and more, and he credits their business experience at the Center as a major influence.
With nine family members in town, in earlier days when the town itself was much smaller, John notes that if the family would have moved, it would have constituted about one percent decrease in population.

By 2006, Rocky Mountain Oil Change Center had expanded to three locations, with stores in Castle Rock and Englewood as well as Monument. In response to consistent growth in the Tri-Lakes area, a new addition has been made to the Monument store. Rocky Mountain Oil Change Center opened a 95-foot tunnel conveyor carwash, complemented by a completely remodeled lobby and building exterior. Using the latest state-of-the-art technology, the carwash heats its water with energy-efficient waste oil burners, and is equipped with an environmental-friendly water reclaim system, which significantly reduces water consumption and waste. The carwash is capable of servicing 70 vehicles in an hour.
With adjustments allowing acquisition of a piece of city-owned property that now put the business on one of the busiest corners at the entrance to the historic part of the growing city, Savage endured, and finally prospered. The emissions testing service (of which, one of his daughters was the youngest ever technician at 15) helped. The changes to the corner and growth of the community helped, and having strong employees (many of them offspring) helped. And the family focus and spirit helped as well.
Much like the complete set of Colorado license plates displayed in the lobby of the center, from 1913 to 1976, the family, the business, the community has been a successful study in trying to serve the target market of local demographics in Monument and the Tri-Lakes area. 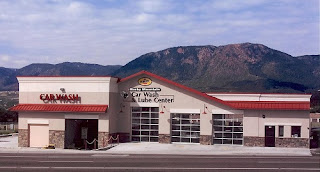 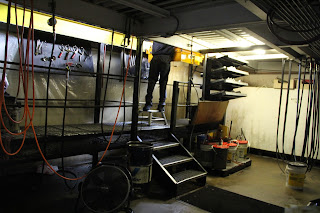