Fear of wrecks haunts us in our tracks 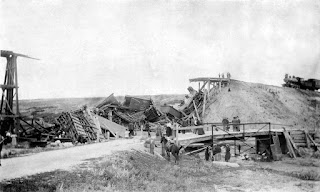 'Cos he was going down a grade making 90 miles an hour,
The whistle broke into a scream.
He was found in the wreck with his hand on the throttle,
Scalded to death by the steam.
_ Norman George Blake, Robert Johnson, Johnny Cash, from Wreck Of The Old '97

Our particular nightmares and disasters, arrive in the scale of train wrecks

In this area, our particular nightmares and disasters, arrive in the scale and form of train wrecks. The ghost that haunts us, is the fear that it ever could happen again.

The following are just some of the local train wrecks that I know of.

“A frightful collision occurred on the Denver and Rio Grande one and one-half miles below Palmer Lake yesterday afternoon about two o’clock, between two extra engines, in which Engineer Hart and Fireman C.F. Fogle lost their lives. The accident was said to have been caused by the carelessness of the two men named and their lives paid the penalty,” according to the Thursday, Aug. 21, 1890, Rocky Mountain News.

“Engine 581, with a pile driver and a caboose attached, left Husted, nine miles below Palmer Lake, about 1:30 o’clock with orders to run through Palmer Lake. At the same time, Engine 258, in charge of Engineer Hart and Fireman Fogle, was given orders to run extra from Palmer Lake to Husted and protect against Engine 581. By the word protect it was meant that they should watch out for the northbound engine and in case where could not see ahead, the fireman was to go ahead with a flag until a clear stretch of track was reached. The track between Palmer Lake and Monument is very tortuous and winding with frequent cuts and great caution has always been observed, especially work engines and trains running as those were yesterday. Engineer Hart, and his fireman, it is presumed, believed that they could reach Monument in time to meet Engine 581, or that they would meet it on the clear track just north of that point. In this supposition they were mistaken and as a result the collision occurred.”
According to reports, the engineer and fireman from the northbound train were able to leap to safety but Hart and Fogle, headed south, were caught in the cab and crushed to death, as well as being badly scalded.

“Poor Fogle was standing between the cab and the tender, just ready to jump for his life, but was caught and horribly crushed, his leg and arm being broken.”

He died before his wife could be summoned from Husted by telegraph.

The report noted “Hart, the dead engineer, has been on the road for some time and was a very efficient man. His first and last mistake occurred yesterday.”

But unfortunately, that was not the last mistake made in that area.

Just five years later, in July of 1895, a Santa Fe freight train went through the bridge at Monument and killed four.

“An appalling wreck occurred on the Santa Fe road near Monument at 11 o’clock this morning,” according to the New York Times. “A freight train consisting twenty cars plunged through a bridge near that place, burying beneath the debris the train crew, a number of tramps and several bridge carpenters who were repairing the bridge. Wrecking crews were quickly dispatched from Denver and Pueblo a special train from Colorado Springs with physicians. These with the citizens of Monument, worked heroically rescuing the dead and injured. One hundred and fifty feet of trestle went down with the train. The scene under the bridge was described as most shocking, freight cars, bridge timbers, and railroad iron being a horrible wreck. The plunge was 50 feet to the rocks below,” according to the Aspen Times then.

Just south of 2nd Street on the Old Denver Highway the catastrophic train wreck occurred. The Santa Fe Bridge Foreman was repairing the three-hundred foot-long trestle. He removed too many cross-braces and when the train attempted to cross the trestle gave way.

In 1902 the Santa Fe began replacing wood trestles with the earth structure that you see today, according to Palmer Lake Historical Society.

The New York Times called it this way.

“There were twenty-four cars in the train loaded with stone, lumber, and timber. The bridge gang, consisting of twenty men, were working under the north end of the bridge. The train passed over them, and was nearing the other side when the timbers gave way, and the train went through into the gulch, fifty feet below. Nearly all the men working on the north end were thrown off, and fell below. Mrs. Cooper, wife of Albert Cooper, the engineer of the bridge work, was sitting on a ledge of rock watching the men work, when the timbers began to crack, and J. C. Childers, who was on the structure, jumped to save her. The leap was to death as he had scarcely reached her side when the great mass of wreckage fell upon them. Both were mangled and buried. Childers was foreman of the bridge gang. There was a moment of silence, and then came the hissing of steam and cries of the scalded men pierced the air.”

Fireman Frye was caught in his cab, but was pulled out. Two brakemen on the engine were scalded.

As soon as possible a wrecking train was brought from Denver, with physicians and surgeons. All that was possible was done for the suffering.

They were taken to the hospital at La Junta for treatment.

The bridge was of wood, 50 feet high and 300 feet long. Twenty minutes before the accident occurred the Midland passenger train crossed the structure. The cause of the accident is unknown. The wreckage is piled up thirty feet, and it is thought that there are bodies still under it. It will take two days at least to clear it away. About half of the bridge was taken away by the train in its descent,” reported The New York Times New York, July 18, 1895.

A decade and half later, down at nearby Husted (near the North Gate of the Air Force Academy), The Colorado Springs Gazette of Aug. 14, 1909, related the story of an equally horrific rail accident there.

“Nine persons are dead, and others are expected to die; between forty and fifty are injured; three engines are in the ditch; two baggage cars, including the contents, are smashed to kindling wood, and several passenger coaches are badly damaged as the result of a head-on collision between east bound passenger train No. 8, and westbound passenger No. 1, on the Denver & Rio Grande, near Husted, thirteen miles north of this city, at 10:25 a.m. today. The wreck was due to a misunderstanding of orders, it is said.”

Report from papers all over the nation carried the dispatches.

As No. 8 drew into Husted about 40 mph, the crew of the engine saw a light engine standing on the switch north of the station.

“Mistaking the engine for the second section of No. 1, the crew did not stop, and went through the station as fast as the two engines could draw the thirteen heavily laden coaches. As soon as the train got out of the station, the engineer of the first engine of No. 8 saw another train coming slowly down the incline. He slammed on the air brakes, and the emergency brakes, and then shouted to the other members of the two crews to jump. Before they had time to jump, No. 8 had rammed No. 1 so hard that all three engines lay in the ditch,” according to the Nebraska State Journal at the time.

“Fireman J.A. Gossage, of train No. 8, was killed as he was firing his engine, and never knew what struck him. The members of the other crew escaped serious injury by jumping.”

The smoker, attached to train No. 8, was the car in which the people were killed. All those badly injured were in the same car.

Other reports said that J.A. or Jack Gossage, the fireman on the helper engine who lived at Husted and had just waved to his wife as the train passed his home, was trapped between the engine and the tender when the collision occurred.

Jack Gossage's wife continued to work for the railroad for many years afterward as a cook for crews in Husted, and the Gossage name eventually became quite famous for other reasons in Colorado Springs. Jack Gossage is grandfather to Colorado Springs standout and major league baseball Hall of Famer Rick “Goose” Gossage.

“The wreck occurred just east of the east switch at Husted. The impact of the trains was terrific and the locomotives and the baggage and smoking cars of both trains were badly damaged,” reported papers at the time.

“The shrieks of the wounded were pitiful and those who were not injured among the passengers immediately started the work of rescue. It was impossible to accurately determine the number of dead, but first reports indicated that eight had been killed.”

Fire ensued and the Burlington Northern engine exploded. Palmer Lake Police Officer John Cameron, Bob Romack and others rushed to the scene which was described as “a tangled mass of twisted, burning metal where Keith Watts of Pueblo was trapped inside one of the engines… pinned to the cab floor.”

The men found the strength to lift a heavy plate from Watts and get him to safety in spite of the threat of explosions from burning diesel fuel.

Witnesses at the scene said it appeared the trains didn’t stop at all. According to a Highway Patrol report, the southbound Burlington went through a red signal suggesting human error. It is reported that in 1981 the Burlington Northern suffered another mishap in Palmer Lake when a freight train jumped the tracks derailing 13 cars.

Today, modern technology such as the use of computers for scheduling and routing, better engineering of the rolling stock, the roadbeds and intersections, have all helped prevent disastrous accidents of this type — at least for now. 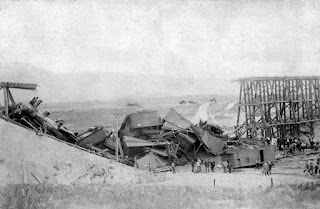 Thanks for the history lesson Rob! I drive right by there everyday and have new perspective about what once was.....