Lessons of the Blizzard of 1997 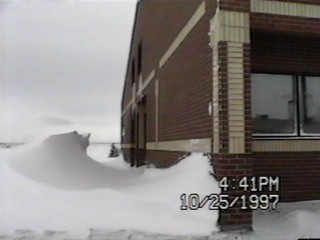 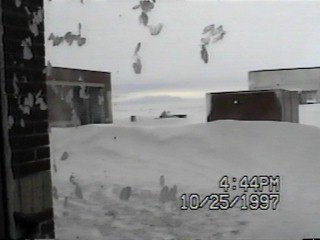 "Monument Town Hall was host to a mariachi band, members of the Denver Symphony, and a FBI agent, on his way to Denver."

Seems like yesterday — and a long time ago. When the warnings first appeared in late October, in the fall of 1997, some forecasters expected eight to 10 inches. When it stopped snowing here in Monument, about 48 hours later, at least four feet had fallen. Wind, cold, drifts and other enhancements made it one for the record books.
The Colorado Blizzard of Oct. 24 -25, 1997 was especially giving to folks here on the Palmer Divide.
Snow began falling heavily on a Friday afternoon, raged through Saturday, and folks were still digging out a week later when we delivered Tribunes Friday, a week later. I personally wrote a check for $700 to a local guy to plow out parking lot (and do something with the snow) on the corner of Washington Street and Third.
District 38 schools were closed Monday, Tuesday and still Wednesday, with outside hope that they could open Thursday, when we put the paper to bed in the ensuing aftermath.
The paper had just been sold earlier that month (announced in the Oct. 9 edition) and I was named by Westward Communications, LLC, to replace longtime owner and editor Bill Kezziah as the publisher at the little house office where Maria Tillberry's Expectation Salon is now. Kezziah had owned, edited and managed the paper for 19 years prior.
Writer (mailroom, photographer, designer, etc..) Jeremy Bangs and I had just finished addressing the papers, and I was running the racks and dealer route when the first calls to rescuers appeared shortly after 4 p.m. that Friday, following a three-car collision on I-25. Four other calls had surfaced in the next 90 minutes. That was just the start of a long weekend for rescue workers.

"Sustained winds to 40 mph with gusts as high as 60 mph produced zero visability and extremely cold wind chill temperatures from 25 below to 40 below zero. Winds whipped the snow into drifts 4 to 10 feet deep," reported the National Weather Service in Pueblo.
"Several major and interstate highways were closed as travel became impossible. Red Cross shelters were set up for hundreds of travelers who became stranded when they had to abandon their vehicles. Four people died in northeastern Colorado as a result of the blizzard."
Evacuation of stranded motorists began at 9:41 a.m. on I-25 Saturday morning with help from three snow mobiles provided by Steve Johnson, Steve Marks and Mitch Schumacher and a privately-owned Humvee belonging to Monument's Steve Wilcox Jr., being the only motorized vehicles for the 14 Tri-Lakes Fire Volunteers and five Woodmoor-Monument firefighters.
Tri-Lakes fire station (now No. 1), evolved into the command center, as motorists were shuttled from I-25 to local gas stations, Stranded motorists found North of  Highway 105 were taken to Conoco, those found south of 105 were taken to the Total station at Baptist Road.
About nine hours later, I-25 and Highway 105 had been cleared of more than 100 motorists stranded in the storm. Then they had to find them more comfortable shelter from the storm.
Public works employees from the town of Monument used a grader fitted with a large V-plow to clear paths to the Falcon Inn and the Monument Town Hall (currently the Chamber building) which housed temporarily more than 300 through Saturday night.
Snowmobiles, cross-country skiers and Humvees, were about all that was able to navigate for the local roadways for a few days.
Monument Police Officer Kristen Rich was transported in from home in Palmer Lake via snowmobile to manage the town hall shelter. Food donated by Safeway, Burger King, and La Casa Fiesta, and distributed by volunteers and firefighters.
"Once settled in, the atmosphere was upbeat," wrote Jeremy Bangs at the time. "Monument Town Hall was host to a mariachi band, members of the Denver Symphony, and a FBI agent, on his way to Denver."
Food and blankets from residents living near the town hall, including Monument Mayor at the time, Si Sibell and his wife Dorothy, who also opened up their home and pool table, for those looking for a place to sleep. Dorothy Sibell cooked breakfast in the Town Hall that morning for 40 plus visitors who remained overnight. Cheryl Schumacher of the Falcon Inn said most visitors there were friendly and happy, even the ones that had to sleep in the banquet room.
"At 2:38 a.m. on Sunday, a woman with a heart attack was reported in Wakonda Hills," according to Bangs' story. "A medical crew set out on snowmobile to the residence while a Humvee following the Monument grader came behind. Though CPR efforts were tried for some time, paramedics could not revive the woman who was pronounced dead at the scene."
That was the only fatality reported initially  in the immediate Palmer Divide area.
Many roads were still closed the following Wednesday after the storm and drifts as deep as 15 feet were reported at Kilmer Elementary, near Highway 83 in District 38. Similar stories came from District 20. Five stranded travelers in four-wheel drive vehicles on Furrow road were forced to break into St. Matthias Church to seek sanctuary from the cold early Saturday morning.
Palmer Lake Mayor at the time Chuck Jones said most roads were open in his town by Monday afternoon and estimated 35 to 38 inches dropped during the storm. The local volunteers were also assisted by eight soldiers in four Humvees from Fort Carson's 759th Military Police unit. Six people were rescued by helicopter on Rampart Range Road on the backside of Mount Herman.
Of course, storms are nothing new around here.  Blizzards have come and gone, before and since.
I recall how the mayor of Denver discounted the threat just two days before this one.
"As much publicity as there has been about El Nino, it would be kind of silly not to be sensitive, given the interest of Colorado people in snow," Denver Mayor Wellington Webb had said that Thursday before under sunny skies as quoted in the Los Angeles Times. "It's expected to be handled, and we want people to know we're prepared to handle it."
Seems like yesterday — yet, a long time ago. 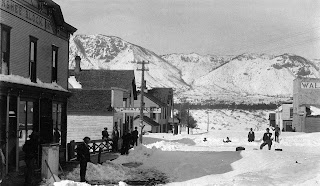 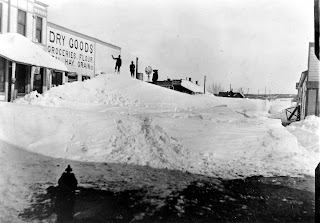 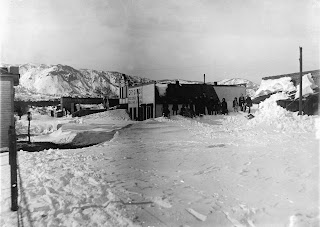