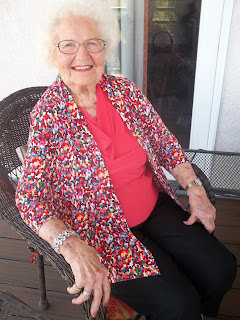 In the summer of 2013, I had the uncommon good fortune of meeting and talking with the wonderful Mrs. Dorothy King, who reminded me of the importance of a life well-lived. Mrs. King's outlook in that chance meeting in the Tri-Lakes area so many years ago, continues to inspire.

How many times have you said something like "If only I were born 100 years ago?"
Mrs Dorothy King —  fervent Los Angeles Dodger and LA Laker fan, artist, world traveler, mother, grandmother, and great-grandmother — was born more than 100 years ago.
And now, she has a lot of things to say about it.
King celebrated her 100th birthday recently at the Inn in Palmer Lake. Family and friends flew in from all over the country.
To give some perspective, when Dorothy was born in the Van Nuys area of the Los Angeles basin, there were only 8,000 cars in entire United States, and only 144 miles of paved roads. Alabama, Mississippi, Iowa, and Tennessee each were more heavily populated than California, (with 1.4 million residents, California ranked twenty-first in the states at that time.)
Her father, a pioneer in the Van Nuys area, worked as a machinist at an organ factory, creating organ pipes for theaters showing silent movies.
"You know,  the organ would play music faster,  and faster, until the wagon would go over the cliff," recalled Dorothy.
She remembers going up Hill Street in Los Angles on the street cars to visit her grandmother's grocery store there.  She remembers going to many movies herself,  "It cost 5 or 10 cents then."
and she remembers the orchards around their house.
"Walnuts, citrus, apricots, and there were chicken ranches."
Today, the L.A. County Courthouse Annex is there.
She also had to ride the cable cars into the city to get real silk stockings when they were rationed during the war (World War I and World War II.)
When she was very young, she decided she wanted to be an artist.
"There were always movie magazines around, and I started to color them even then."
Her passion was transformed into drawings, and sketches, and later...  art training at Frank Wiggins Trade School, and later still...  a job at an agency, tinting sepia-tone prints into color.
All the while, raising a son, and two daughters. Her husband was a butcher, and provided the Van Nuys area the very best in beef (it was coming from Utah, at the time, she recalls), but she found herself widowed at age 57.
"My dad built me a desk in the house."  The house where she continued to tint photographs in days prior Kodachrome, and then restored and repaired memories and prints from times past, until her retirement at age 94.
Her father, also lived a long life, traveling around the country, visiting the country's capital, including the Pentagon, White House, and Smithsonian (where he recognized most of the legacy tools), finally passing at 97.
Dorothy enjoys travel herself, having seen the sights in Europe, Honk Kong, Hawaiian Islands, though she recalls and misses the heyday of commercial flight.
"They used to dress so well on planes. And the food was good."
But today, with five grandchildren and nine great-grandchildren, along with the Dodgers and the Lakers to keep up with, it is sort of hectic. Especially when the seasons overlap.
"She will be watching the Dodgers on the big screen, and have the Lakers on her I-Pad," says her daughter Sheryl. "That is why we had to get a special cable subscription, so she doesn't miss a game." 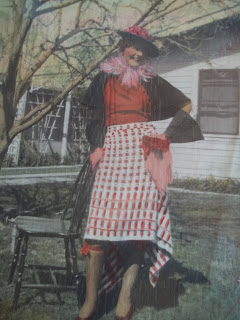 Dorothy, in an earlier time. She used the color from a table cloth as inspiration on this tint. 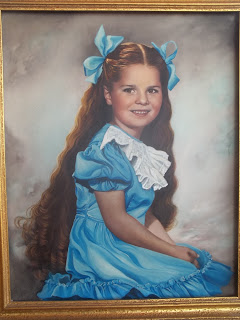 One of her daughters, lovingly tinted from a sepia-tone print.