Ghosts of populations past in Teller County 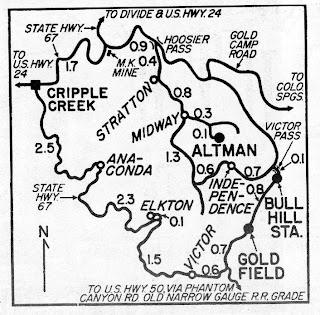 Numbers were much larger at the turn of 20th Century

Among the first things a modern day visitor notices when they first drop down into the bowl that is Cripple Creek, is the ghost, or "presence" of populations past. It is a similar feeling in nearby Victor.

At one time, about 1900, Cripple Creek was the fourth largest city in Colorado, and boasted a population of 25,000 people, along with a fair amount of dogs, and donkeys.
Today's population figures put it closer to 1,200.
The mining district at the time, of course, also counted the camps of Cameron, Altman, Independence, Elkton, Anaconda, Midway and Gillett. Most estimates put the district at a population of nearly 50,000 at the height of the boom.
Victor had a population of nearly 12,000 residents itself in 1900 according to the census. Today roughly 400 people live in Victor.
Goldfield, at the time, claimed 3,500 residents, and Altman and Midway combined added another 1,500. Independence counted 1,500 for its own. Anaconda, weighed in with 1,000, Gillett and Cameron each put forth 1,000. Even Beaver Park, (or Love, as it was also known), contributed 75 to the count in 1900. Elkton, which included Arequa and Eclipse tossed in another 2,500.
Of course, there was also the lumber town and health resort of Woodland Park. When it was incorporated on Jan. 26, 1891, 38 votes were cast in favor of incorporation and 14 voted against. The "City Above the Clouds," Woodland Park has grown some, tipping the scales recently at 7,200 residents.
Between Divide and Woodland Park, the settlement of Edlow had its own rail depot, school, and 10-room hotel. Estimates by the Ute Pass Historical Society a few years ago had nearly 2,000 residents living between Green Mountain Falls and Divide at the 1900-year-mark.
Divide, itself was a stage stop, and a tent city for rail workers, as branch lines from the gold district joined the mainline of the Colorado Midland there. Florissant, had nearly 300 residents in in 1890s, but boomed as well by the turn of the century as it became a pathway into the camps.
Today, Teller County's population is estimated at about 24,000 residents. Just a little shy of Cripple Creek by itself, at the height of the boom around 1900.
Posted by ___ Restless Native at 8:56 PM