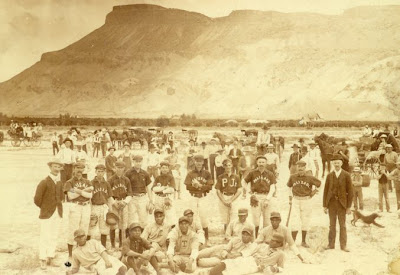 The tendrils of relationship reach across mountains and states, names and people, and things seemingly unrelated. Perhaps there is a connection after all.
A 160-acre parcel of land in Grand Junction, once owned by the federal government, served for nearly 25 years as the Teller Institute, an off-reservation Indian boarding school. It was informally called the Teller Institute for Congressman Henry M. Teller, who promoted the enabling legislation in Congress -- the same Henry Teller that Teller county was named for.
Construction began on the school in 1885 and according to Ben Fogelberg, of the Colorado Historical Society in a recent article in Colorado Heritage, “was originally built for children and young adults from the Uintah and Ouray reservations in Utah and the Southern and Ute Mountian Ute reservations in Colorado.”
By the turn of the century in 1900, nearly 200 students per year enrolled there and Ute, Navajo, Papago, Moquis, Shoshone, Tonto, Coyoteno, Pima, Hopi, Jicarilla Apache and other tribes were all represented.
“The facility embodied the federal goal to assimilate native people into American society through English language and vocational instruction in a setting far removed from tribal culture,” wrote Fogelberg.
Early accounts of poor living conditions, severe discipline and abuse cost the school support from the Ute families that it was originally built for, and by 1893, less than 14 percent of the students there belonged to a Ute tribe, according to historian Donald MacKendrick.
“In practical terms, fitting American Indian students for citizenship meant giving them the equivalent of an eighth-grade education emphasizing vocational skills – farming, blacksmithing, tailoring, domestic chores – over academic subjects other than English. In Grand Junction, pupils learned ‘enough English to transact the business of common life’ and made a staggering array of marketable products, from neckties and napkins to bridles and butter,” Fogelberg wrote.
The Indian school educated Native Americans from 1886 until 1911 and in addition to the many trades perfected there, athletics was held in high regard with football teams, baseball and track in the forefront. The experience of two other American Indians, Jim Thorpe and Lewis Tewanima, who became national heroes after attending a similar boarding school environment in Pennsylvania, was considered remarkable but possible here as well.
The students, both male and female, were instructed in the fine arts with various bands, orchestras, and wore fine fashionable clothing fitting of high culture.
The Federal Government decided to return Native American students to their homes for their education and the boarding school was closed in 1911, its assets were liquidated and the land given to the State of Colorado, according to the Colorado Department of Human Services.
“After the buildings had been vacant for several years, the State opened a training school in 1921, known as the State Home for Mental Defectives, to serve ‘handicapped and retarded students.’ The name was later changed to the State Home and Training School. By the 1960s, upwards of 800 people lived at the State Home, were some went to school and others worked on a diary farm within the plot of land owned by the state. The name of the facility was changed to the Grand Junction Regional Center in the 1970s,” says the Colorado Department of Human Services on its website.
###
Posted by ___ Restless Native at 12:13 PM