The Ratcliff side of the story 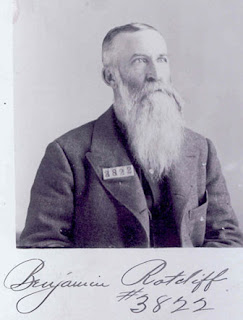 In regard to a previous post of mine regarding the Ghost of Gottleib Fluhmann, I recentlty was sent the following communication from a descendant of Benjamin Ratcliff.
"Several Colorado residing descendants of Benjamin Ratcliff report that they have never heard the tale of Gottleib Fluhmann. The references cited seem to be based on exaggerated local commentary and contain inaccurate facts. So without proof, they feel that Benjamin has been unfairly accused of the serious charge of being Gottleib's killer."
"However, in the matter of the Bordenville school board, this is the account from Benjamin's oldest child - and Only son - as told to his grandson: Some time around 1875 Benjamin and his wife moved from Missouri to Park County, Colorado, and established a farm about seven miles from Bordenville. Their son and two daughters were born there. His wife died there in 1882 while the children were still very young. Benjamin raised the kids there until 1895. He had a running battle with the local school board in 1894. He wanted them to provide a summer school program, allow the school books to be loaned out, or set up a school closer to his ranch. He taught his children at home, and wanted some help with that. Winter weather was too bad to make the trip to school. Late in 1894 unsupported gossip spread that incest involving Benjamin and his older daughter spread around the local area. He became enraged. The man most responsible for spreading the gossip was on the school board. Benjamin's temper escalated and he ended up shooting all three members of the board as they met together at the school May 6, 1895. He turned himself in the same day as the shooting. Eight months later, on the evening of February 7, 1896, he became the ninth execution by hanging (out of 45 in the history of the state) at the prison in Canon City. "
The descendant, a Colorado native now living in Westminster, also provided this prison photo of Benjamin Ratcliff.
###
Posted by ___ Restless Native at 4:41 PM

I had two 3rd Great Uncles living in the Bordenville area. Timothy and Olney A Borden and would like to talk with Benjamin Ratliff's descendent.