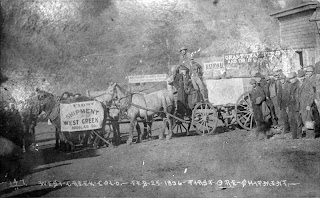 Some mining districts just can’t catch a break. Take, for example, the ups, the downs, the sideways movement of fortune, as it struggled to avoid a kiss on West Creek.
“In April 1895, Captain George F. Tyler triggered the short lived gold rush of the West Creek Mining District when he sent his son to Denver with ore samples extracted from his ranch between Trout Creek and West Creek,” writes Susan Consola Appleby in her 2001 book “Fading Past: The Story of Douglas County, Colorado.”
The newspapers at the time became big boosters.
“Several persons who were at Cripple Creek when that camp was being developed, say that at the surface of Cripple Creek could not show as much rock that run in gold or that carried as much gold as the camp here. And we know of no one who has examined and has said to the contrary,” read an October, 1895, story in the Castle Rock Journal.
In early 1896, miners streamed into the area creating the mining camps of Pemberton, West Creek, North West Creek, North Cripple Creek, Ackerman, Trumbull and Given. In a March 16, 1896 election, these camps voted to merge and incorporate as West Creek, Douglas County’s second incorporated town.
About the same time the Rocky Mountain News declared,” Its growth has been as substantial as it has been rapid. Its development will be as permanent as it will be wonderful.”
But lacking the one element needed to sustain growth in a gold camp, namely enough gold, the growing city fizzled to a fraction of its size within a year.
By 1898, the struggling town’s own newspaper, The Mountain Echo complained of its decreasing population near election time.
“Never in the history of the town of West Creek has it been so dead that it could not support two tickets. There are now just thirty-two legal voters in the town and eleven of them are candidates.”
Perhaps sensing its own venerability, the newspaper however tried to fan the dying embers of the gold seeker’s flame with its February 25, 1899 story headlined “MILLIONS IN IT!” and subtitled, “A careful and conservative description of a mining proposition which, when developed, will be on e of the most important in America — A truthful statement of actual facts.”
The article went on to describe in detail what it called the most important proposition in the West Creek District is what is commonly known as the Sand Belt.
The paper was still trying to fan those same embers when it reported in April of 1899, “John Wanamaker, the multi millionaire merchant prince of Philadelphia, has appeared as an operator in the West Creek mining district.”
“A 100-ton concentration mill arrived a day or two ago at Woodland Park station on the Colorado Midland road, and will be shipped to Manitou park, nine miles north of Woodland, where recent developments in the sandstone deposits of that region have attracted attention to the mining of gold.”
The paper said an order for 40,000 feet of lumber was placed for the mill and its capacity was a hundred tons a day. It reportedly was brought from the Black Hills district in South Dakota. Wanamaker purchased five claims in the area for $10,000. Two of those claims were in Teller County and two in Douglas. The mill was half in one county and half in the other.
“The greatest development on any one mine is upon the Primrose, which has a shaft down 125 to 150 feet. Assays as high as $1,500 have been shipped. The values were all in little seams. There is a ledge ten feet wide which averages from $2 to $6 to the ton.”
According to the Mountain Echo, “The manager of the new mill states that if he could get $1.50 a ton profit on the ore treated, he could make it pay for the plant in a few months.”
Maybe that is true, but that kind of profit, and richer deposits of gold, were elusive.
The West Creek area residents eventually abandoned golden hope of a bonanza and turned their concentration to other endeavors.