Build your own roads 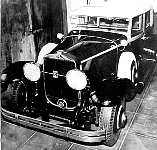 A number of historians claim that Spencer Penrose was so impressed with the first automobiles ability to climb a new road up the Ute Pass that he decided then and there to build the Pikes Peak highway.
“Colorado’s roads were an abomination all through that pioneer motoring period. As late as 1912, only a handful of tourists dared to risk their cars on visit to the Springs,” wrote Marshall Sprague in his 1971 book “One Hundred Plus: A Centennial Story of Colorado Springs.”
“A year later, car traffic increased with the opening of the new Lincoln Highway up Ute Pass. Penrose was so impressed with the ease the huffing Reos and Olds and Wintons climbed the pass without blowing up that he decided an auto road to the top of Pikes Peak was both feasible and dramatic enough to make news,” wrote Sprague.
“He was encouraged in this view on July 17, 1913 when two Denver daredevils, H. Brown and J.F. Bradley, drove a Buick Bearcat to the summit in four hours — the first car to go all the way.”
Upon learning of these successes, Penrose and several friends decided to seek permission from the U.S Department of Agriculture to build a highway to the top of the Peak along an existing horse carriage road that had been used at least since 1889.
He was reportedly warned that it could cost as much as $25,000 and was not likely to be profitable in that it would compete with the Cog Railway.
Penrose proceeded anyway on the road in 1915 and it ended up costing nearly a quarter of million dollars of his own money.
The road up Ute Pass was accelerated as much of the highway construction in Colorado near the turn of the century by use of convict labor beginning in 1905.
“Convicts built many of the first paved roads … including the State Highway from Pueblo to Leadville and the scenic highways in Big Thompson, Boulder, Colorado River and St. Vrain canyons, and the Ute Pass Road connecting Colorado Springs to Leadville,” says the “Historical Atlas of Colorado (1993),” by Thomas Noel, Paul Mahoney, and Richard Stevens.
“At first many felt that the wealthy who owned autos should build their own roads, as millionaire Spencer Penrose did,” notes the Atlas. “Penrose, who bought a new car each year, constructed a highway to the top of Pikes Peak as the ultimate challenge for motor cars.”
###
Posted by ___ Restless Native at 8:30 AM