The legend of 'Rattlesnake Kate' 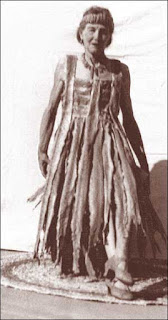 'She earned the title the hard way'

The legend of 'Rattlesnake Kate' was a big enough deal locally to make the front page of the Greeley Daily Tribune and Greeley Republican that Thursday, in early October, 1969, after Kate died in Weld County General Hospital the preceding Monday. Her story was placed right there at the top alongside the casualty considerations from Saigon, and above the stories of growing opposition locally to the war in Vietnam.
"She'was known as 'Rattlesnake Kate' and she earned the title the hard way," wrote Jim Briggs, Tribune staff writer at the time.
"Yes, Ms Kalherine Slaughterback, was buried Thursday afternoon but the legend she leaves behind was not buried with her."
The saga of "Rattlesnake Kate" was recalled Wednesday by Mrs. Leta Woolridge of La Salle, a close friend of Ms. Slaughterback.
"Early that morning hunters had been banging away before daylight at the ducks that stopped overnight at the pond. Kate Siaughterback knew from experience that there would be some wounded ducks there.
some wounded ducks so she , saddled up her horse, got down her .22 Remington, lifted Ernie into the saddle and off they went to the pond to search for ducks for supper.
She hopped off the horse to open a gate and there at the gate post, coiled up and ready to 'fight anything that came — along was a huge rattlesnake."
"This didn't bother her much. She took the rifle out of the saddle and blew the head off the reptile. But he had his gang with him, and Kate heard the dreadful warnings from three directions. Three, glistening, thick-bellied rattlers slithered into the open toward her," wrote Briggs.
Katherine McHale Slaughterback was born on July 25, 1893 (or 1894) to Wallace and Albina McHale in a log cabin near Longmont, Colorado. She would go on to attend nursing school at St. Joseph's School of Nursing and move to Hudson, Colorado. She also had skill as a taxidermist. She frequently wore pants instead of dresses, which was unusual for a woman at the time.
Slaughterback married and divorced six times—one of her husbands was Jack Slaughterback —and had one son, Ernie Adamson. It is disputed if Ernie was an adopted child or born to her out of wedlock.
According to the lore, Slaughterback singlehandedly killed 140 rattlesnakes Oct. 28, 1925.
Slaughterback and her three-year-old son Ernie were on horseback headed to a lake near her farm. Hunters had been there the day before, and she was hoping to find harvested ducks left behind. However, she instead found over 100 migrating rattlesnakes. Kate shot the snakes until she ran out of ammunition for her .22 caliber Remington rifle, at which point she grabbed a nearby sign (reportedly, it said "No Hunting") and bludgeoned the remaining snakes to death.
Of her snake-killing spree, Slaughterback later said:
"I fought them with a club not more than three feet long, whirling constantly for over two hours before I could kill my way out of them and get back to my faithful horse and Ernie, who were staring at me during my terrible battle not more than 60 feet away."
She was "frantic that [the snakes] would frighten the horse, and cause him to rear up and throw Ernie into the snakes."
The story goes she returned to her farm afterward, a neighbor learned of what had happened, which eventually led to a reporter coming to photograph and interview her. She strung the dead snakes together on a rope for the photograph, which became famous. She would later make herself a dress, shoes, and belt from the snakeskins. The dress, made from the skins of 53 rattlesnakes, was particularly famous. She claimed later that she received an offer from the Smithsonian Institution to buy it for $2,000.
Her story became popular and was written about it the New York Evening Journal. News of her exploits was reported as far away as Germany, Belgium, Scotland, France, England, Mexico, and Canada.
Later in life, Slaughterback reportedly raised rattlesnakes, milking them for their venom and selling it to scientists in California. Three weeks before her death, Slaughterback donated her famous rattlesnake skin dress to the Greeley Municipal Museum; Ernie donated more of her possessions after her death, including her Remington rifle.
Slaughterback was a nurse during World War II and served in the Pacific Theater. She lived in El Paso, Texas for a few years. She died on Oct. 6, 1969, and was buried in Mizpah Cemetery in Platteville, Colorado. On her headstone, her name simply reads "Rattlesnake Kate," per her request. She was survived by her son, two grandsons, and two great-grandchildren.
Former member of The Lumineers and Colorado native Neyla Pekarek wrote a folk opera about Slaughterback called Rattlesnake. Pekarek was then commissioned by the Denver Center for the Performing Arts to create a full musical about the legend of 'Rattlesnake Kate.' Other songwriters, including Carter Sampson, have also touched on the subject. 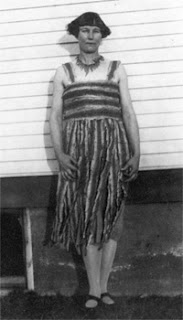