Adventure is for the adventurous

“Say that I starved; that I was lost and weary:
That I was burned and blinded by the desert sun;
Footsore, thirsty, sick with strange diseased;
Lonely and wet and cold, but that I kept my dream!
my dream!”
__ Everett Ruess 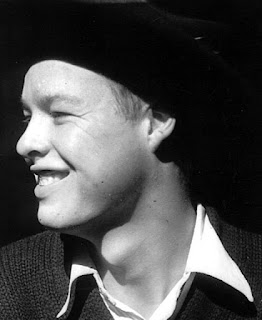 Although he vanished in the desert when he was only 20, Everett Ruess had already befriended artists like accomplished photographer Dorothea Lange who took this photo of him. Dorothea Lange, American, 1895-1965, Untitled (Portrait of Everett Ruess), 1933, © The Dorothea Lange Collection, Oakland Museum of California, City of Oakland.

Everett Ruess was known for making linoleum prints of landscapes and nature, and was associated with Ansel Adams and Dorothea Lange. His prints show scenes from the Monterey Bay coast, the northern California coast near Tomales Bay, the Sierra Nevada, Utah, and Arizona.

Ruess wrote no books during his life, but he was a lifelong diarist, and he sent home hundreds of letters. His journals and poetry were posthumously published in two books, both illustrated with his own woodcuts:

Ruess's story, along with that of Christopher McCandless, was retold more briefly in Jon Krakauer's 1996 book Into the Wild. He is also mentioned in Edward Abbey's 1968 book Desert Solitaire. Wallace Stegner, in his 1942 book, Mormon Country, devotes an entire chapter, "Artist in Residence...", pages 319-350, to Ruess's travels and disappearance in southern Utah.

"… as to when I revisit civilization, it will not be soon. I have not tired of the wilderness… It is enough that I am surrounded with beauty… This had been a full, rich year. I have left no strange or delightful thing undone I wanted to do," said Everett's last letter to his brother, Waldo.

Ruess disappeared before his last letters could be sent from Escalante and his 1934 diary was never found.

Starting in 1931, Ruess traveled by horse and burro through Arizona, New Mexico, Utah, and Colorado, exploring the high desert of the Colorado Plateau. He rode broncos, branded calves, and investigated cliff dwellings. Ruess explored Sequoia and Yosemite National Parks and the High Sierra in the summers of 1930 and 1933. In 1934, he worked with University of California archaeologists near Kayenta, took part in a Hopi religious ceremony, and learned to speak Navajo. Ruess had limited success trading his prints and watercolors to pay his way, and primarily relied on his parents' support.

On November 20, 1934, Ruess set out alone into the Utah desert, taking two burros as pack animals. He was never seen again.

Earlier in 1934, Ruess had told his parents he would be unreachable for nearly two months, but about three months after his last correspondence, they started receiving their son's uncalled-for mail. They wrote a letter to the post office of Escalante, Utah, on February 7, 1935. A commissioner of Garfield County, H. Jennings Allen (the husband of Escalante's postmistress), saw the letter and decided to form a search party with other men in the area. Ruess' burros were found near the north side of Davis Gulch, a canyon of the Escalante River. The only sign of Ruess himself was a corral he had made at his campsit in Davis Gulch, as well as an inscription the search party found nearby, with the words "NEMO Nov 1934".[10] Allen reported the discovery of the burros and the inscription to Ruess' parents in a letter dated March 8, 1935. On March 15, after completing a last attempt to find Ruess in the Kaiparowits Plateau, Allen wrote a final note to the family calling an end to the search efforts.[11]

Later searches in late May and June 1935 included an aerial survey of the land from an altitude of 12,000 feet, covering the ground from Lee's Ferry to Escalante. On the ground, a party of nine horseback riders joined the search, but discontinued their effort a week later.

Some believe Ruess may have fallen off a cliff or drowned in a flash flood; others suspected he had been murdered.

“Nearly 65 years after Ruess disappeared in the Escalante Desert, you can rouse a lively debate in almost any bar between Santa Fe and Flagstaff over the possible ways he met his fate,” wrote Roberts in a 1999 article in National Geographic Adventure magazine.

During his quest, Roberts hiked much of the same land as Ruess and spent three days in Davis Gulch where the young explorer disappeared, searching for answers. Despite all of the leads Roberts followed, including interviews with dozens of people in the region, he was no closer to solving the case.

In 1971, a Navajo named Aneth Nez told his granddaughter, Daisy Johnson, that he witnessed from afar the murder of a young white man near Bluff, Utah, in the 1930s by Ute Indians. Nez told her he buried the body in a crevice on nearby Comb Ridge, a jagged, 80-mile-long ridge of Navajo sandstone peppered with yucca and piñon pine that stretches from Blanding, Utah, into northern Arizona.

The discovery of a grave site on Comb Ridge, near the town of Bluff, Utah, added to the mystery. An elderly Navajo claimed that Ruess was murdered by two Ute Native Americans who wanted his burros. Bones and teeth found in the grave allegedly matched Ruess' race, age, size, and facial features.

In April 2009, comparison of DNA from the remains and that of Ruess' nieces and nephew and comparison of the skull to photographs, seemed to confirm that the remains were those of Ruess. Two months later, however, Kevin Jones, state archaeologist of Utah, advised the remains probably were not Ruess', since dental records from the 1930s did not match those in published photographs of the body.

On October 21, 2009, the Associated Press reported that DNA tests conducted by the Armed Forces Institute of Pathology showed the remains were not those of Ruess. They identified them as of likely Native American origin. A later article in National Geographic Adventure Magazine identified problems in the DNA matching software as the source of the error.

In March 2010, the family of Joe Santistevan was contacted by the Armed Forces DNA Identification Laboratory (AFDIL) and was informed that the Y-DNA of the remains initially identified as Ruess matched exactly to Santistevan. AFDIL found a 13-marker exact match between the man buried at the Comb Ridge site and Santistevan. AFDIL then ran another Y-DNA test and reconfirmed the 13 markers and confirmed four more exact matches. Santistevan's remains were returned to the Navajo Nation. 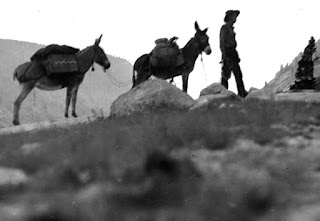 "Everett Ruess was an artistic, adventurous young man who set out alone several times to experience the beauty, as well as the fury, of nature in the American West. During the 1930s, he met and discussed art with painter Maynard Dixon, and with well-known photographers Ansel Adams, Edward Weston and Dorothea Lange. He was lured first by the splendors of Yosemite and the California coast, and later by portions of the lonely red rock lands of Utah and Arizona. In November 1934, at age twenty, Everett disappeared from the canyon country near Escalante, Utah, and was never seen again. Although his burros were found near his camp, his fate remains a mystery," says the current site. everettruess.net
Posted by ___ Restless Native at 6:54 PM