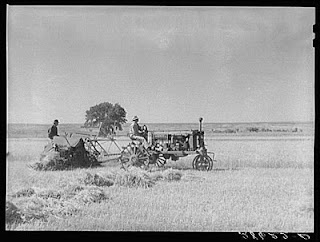 By Rob Carrigan, robcarrigan1@gmail.com
The Resettlement Administration (RA) was a New Deal U.S. federal agency created May 1, 1935. It relocated struggling urban and rural families to communities planned by the federal government. On September 1, 1937, it was succeeded by the Farm Security Administration.
Colorado benefitted from projects all over the state.
In the 1930's, Fruita also participated in several government projects including the Grand Valley Resettlement Project (later Western Slope Farms). Settled in groups of two or three families per area, thirty-four families were relocated by 1937.

According to the town of Fruita's site, "The original town site was planned to take in eighty acres with a park in the middle. In the 1930's Fruita participated in several government projects including the Grand Valley Resettlement Project. Settled in groups of two or three families per area, thirty-four families were relocated by 1937. Another program was Rural Electrification Project which brought electricity to between 800 and 900 farms. Fruita also had a Civilian Conservation Corps several Works Progress Administration projects including the town library, a federal loan for the new central school and the construction of the spectacular Rim Rock Drive to the top of the Colorado National Monument, elevation 8,000 feet."
Resettlement projects were also present in the San Luis Valley.
“In the 1930s, the Waverly area once again was to be the site for newcomers seeking a better life. Henry Gestefield, a German immigrant, worked as a Farm Management Specialist for the Farm Security Administration (FSA) Resettlement Division to develop 82 farms for the resettlement of destitute Dust Bowl farmers. Along with Mr. Yoshida, he was integral to the raising and shipping of iceberg lettuce in the San Luis Valley. The town of Waverly was established with support of the FSA Resettlement Project. The Houlton and Russell families were among the first of many families to relocate from eastern Colorado to the San Luis Valley in 1937 having been hit hard by the Black Rollers of the Dust Bowl. While only a few of the original families remain in the Valley, those who stayed were able to put their lives back together in Alamosa County after the difficult years in the Prowers County area. With the help of the “CCC boys” (Civilian Conservation Corps), several families were able to successfully work the land, develop ditches, and produce profitable crops of alfalfa, oats, and potatoes.” according to Alamosa County Centennial.
The Farm Security Administration (FSA) was a New Deal agency created in 1937 to combat rural poverty during the Great Depression in the United States. It succeeded the Resettlement Administration (1935–1937).

The FSA is famous for its small but highly influential photography program, 1935–44, that portrayed the challenges of rural poverty. The photographs in the FSA/Office of War Information Photograph Collection form an extensive pictorial record of American life between 1935 and 1944. This U.S. government photography project was headed for most of its existence by Roy Stryker, who guided the effort in a succession of government agencies: the Resettlement Administration (1935–1937), the Farm Security Administration (1937–1942), and the Office of War Information (1942–1944). The collection also includes photographs acquired from other governmental and nongovernmental sources, including the News Bureau at the Offices of Emergency Management (OEM), various branches of the military, and industrial corporations. 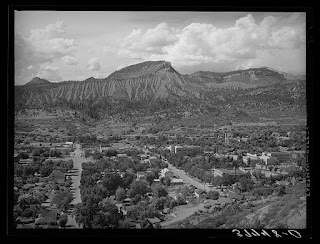 Critics, including the Farm Bureau, strongly opposed the FSA as an alleged experiment in collectivizing agriculture—that is, in bringing farmers together to work on large government-owned farms using modern techniques under the supervision of experts. After the Conservative coalition took control of Congress, it transformed the FSA into a program to help poor farmers buy land, and that program continues to operate in the 21st century as the Farmers Home Administration.
"Doc" Conway, rancher from Craig, Colo., talking with Beckman, commission merchant from Denver stockyards, by livestock pens in Craig. Marion Post Wolcott, photographer, photo created September, 1941. 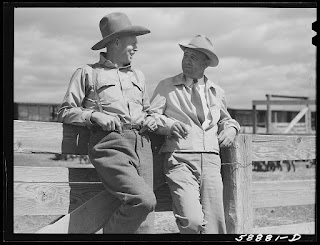