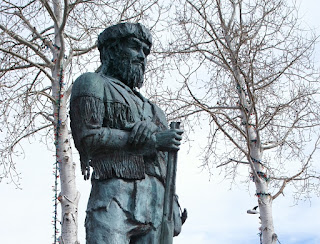 Known as 'Old Solitaire,' as he preferred to ride alone

An excellent horseman, he could also walk long distances in extraordinarily short periods of time. Additionally he was recognized an expert tracker, and unorthodox and deadly fighter when necessary. He is said to have carried in his head a sharp mental map of western rivers and mountain ranges which stretched from the British holdings in the north, southward into Mexico and west to Oregon and Mexican California.

"The most interesting and enigmatic of these colorful mountain men was Bill Williams. They called him “Old Solitaire” because he preferred to ride alone. He was a stubborn, eccentric, independent man obligated to nobody but himself. In a land where it wasn’t safe to trap alone, Old Bill did, and he always returned with his pack mules loaded down with beaver pelts. He always knew when to make a stand and when to run. That’s probably why he lived to be an old man," according to Marshall Trimble, in a 2017 True West article.

Old Bill Williams was one of those rare individuals who can be characterized as a Mountain Man’s Mountain Man, says Malachite’s Big Hole, a site dedicated to the arts, skills and lore of the Mountain Man and is intended to be a resource for all aspects of life in the mountains and the men who lived there.

"Standing 6 foot 1 inches tall, he was lean and sinewy, possessing unusual strength.  He had blue eyes and red hair, and usually wore a full beard.  He so excelled in the skills of the trapper’s trade, that he became legendary amongst his own peers.  He marked his furs and skins “William S. Williams, M.T,” the M.T. standing for Master Trapper.  And although sharp in his business dealings, he seldom could hang onto his returns for longer than a few days, being addicted to gambling, whiskey and the tender attentions of the fairer sex."

Following is an Old Bill Williams description by fellow adventure seeker of the time, George F. Ruxton.
"Williams always rode ahead, his body bent over his saddle-horn, across which rested a long heavy rifle, his keen gray eyes peering from under theslouched brim of a flexible felt-hat, black and shining with grease. His buckskin hunting-shirt, bedaubed until it had the appearance of polished leather, hung in folds over his bony carcass; his nether extremities being clothed in pantaloons of the same material. . . . The old coon's face was sharp and thin, a long nose and chin hob- nobbing each other; and his head was always bent forward, giving him the appearance of being hump-backed. He appeared to look neither to the right nor left, but, in fact, his little twinkling eye was everywhere. He looked at no one he was addressing, always seeming to be thinking of something else than the subject of his discourse, speaking in a whining, thin, cracked voice, and in a tone that left the hearer in doubt whether he was laughing or crying."
Much has been written about Old Bill. The following characterization was printed originally in The Cincinnati Atlas of 1845 and recently reprinted by Edward Eberstadt & Sons. It was written by David Brown, who met Old Bill and other trappers at the Green River Rendezvous of 1837. The occasion was a party given by Sir William Drummond Stewart in his big tent. About thirty Mountain Men were present. Brown writes:
"Next to Bridger, sat Bill Williams, the Nestor of the trappers. A more heterogeneous compound than this man, it has never been my fortune to meet withal. He was confessedly the best trapper in the mountains; could catch more beaver, and kill more horses, by hard riding, in so doing, than any that had ever set a trap in these waters. He could likewise drink more liquor, venture farther alone in the eager pursuit of game into the neighborhood of dangerous and hostile Indians, spend more money, and spend it quicker than any other man. He could likewise swear harder and longer, and coin more queer and awful oaths than any pirate that ever blasphemed under a black flag. . . . He could shoot (so he said ) higher and deeper, wider and closer, straighter and crookeder, and more rounding, and more every way than 'eyer a son of .......... of them all."

"Old Bill became guide for Fremont on his fourth expedition, seeking a railroad route in 1848. They headed into the high San Juans in the dead of winter. All of the 120 mules froze to death and one-by-one dropped over like blocks of ice into the snow. One third of the thirty-three men perished in this unsuccessful attempt to cross the Rockies in winter. It was the worst explorers' disaster in Colorado history," says historian Leroy R. Hafen in presentation prepared for the Colorado Historical Society. Hafen was a historian of the American West and a Latter-day Saint. For many years he was a professor of history at Brigham Young University (BYU).

Once the team entered the mountains, Williams changed his mind due to the heavy early snowfall. He warned the party against continuing and insisted on a southern route. Frémont continued, and the expedition was defeated within the San Juan Mountains, where 10 expedition members died of starvation and exposure.

The next spring Old Bill and Benjamin Kern were sent back from Taos to recover the cached equipment. On the recovery trip they were killed by the Indians, probably Ute.