Economies created in wake of the train tracks 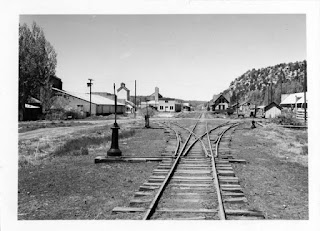 Early on, the Rio Grande Southern Railroad (RGS) was described as a "Bonanza" road — but that didn't last long. As an instant success, it quickly generated more than enough money for the investors to cover costs to build the railroad — unfortunately the money did not last. Within two years, the Silver Panic of 1893 permanently crippled the railroad's finances.
It limped along for the rest of its 60-year lifespan, yet still creating economies along its tracks that lasted long after it was gone.
The line was completed on Dec, 12, 1891, when two construction teams which began at the ends, met south of Rico. Then the RGS was booming, profitable for the company and investors, and producing higher than the average pay for RGS Employees. This only lasted for a year and a half however, as the Silver Panic of 1893 had resulted in most of the mines the railroad serviced closing overnight, and the railroad lost most of its traffic. 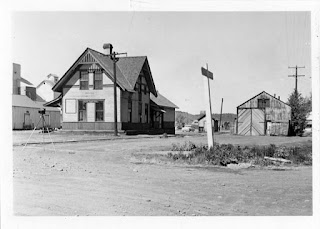 Rio Grande Southern Railroad depot at Dolores.
Dolores was a good example of the economies it created.
The main highway in and out is still called “Railroad Avenue.” Various buildings around town were labeled with left-over monikers such as the ‘track warehouse’ or the D&RG Southern Hotel.
Corrugated tin, painted Denver & Rio Grande yellow, covered the outside of dozens of other buildings, and platforms, built to service freight from boxcars, still appeared in front of about a third of the businesses in town.
When I was growing up there, the boarded-up section house still stood between the Sixth and Seventh Street out on the highway. 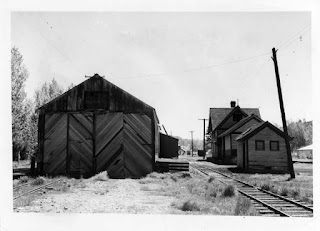 Rio Grande Southern Railroad depot and engine house at Dolores, 1951.
Legions of cub scouts were still able to gather rail spikes, track hardware and telegraph insulators from the rotting ties and weathered poles in Lost Canyon and pack them over across the rusting Fourth Street Bridge back into Dolores. They would end up in a coffee can in someone’s garage or as tent stakes, or sold for scrap at Curt’s Trading Post.
The town of Dolores was born with the railroad in mind.
“In 1889 plans were made by Otto Mears for a railroad running through and around the western flanks of the San Juan Mountains from Ridgway in the north to Durango in the south,” according to the Mountain Studies Institute. “The railroad would tap the riches accumulating in the booming mountain mining towns of Telluride and Rico and the smaller mining camps between the two towns. The 162-mile railroad would, as well, link two segments of the Denver & Rio Grande Railroad coming into Durango from the east and into Ouray from the north. The new railroad would be known as the Rio Grande Southern.” 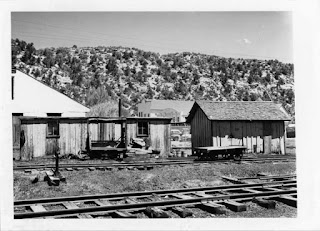 Rio Grande Southern Railroad tool houses at Dolores, 1951.
But as we all know, it is important to be near where the action is.
The fledgling settlement of Big Bend, which had been located nearly two miles downriver from present-day Dolores since 1878, basically pulled up stakes and moved to where the rails from Durango entered the Dolores River Valley.
“In 1890 two Big Bend businessmen laid out the town site of Dolores at the mouth of Lost Canyon. The rest of the citizen’s of Big Bend soon followed. By the time the tracks reached Dolores on Thanksgiving Day, 1891, the community of Big Bend was no more,” according to Mountain Studies Institute.
Born as a product of the rails, for 60 years Dolores lived in the shadow of the line, finally waving goodbye from the platform in 1951 when D&RG Southern closed and most of the track was pulled up and sold for scrap. 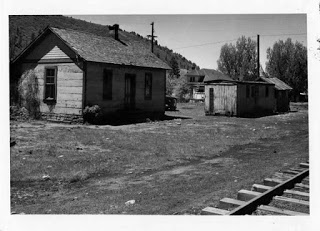 Section house and storage at Dolores.

As the railroad attempted to recover from the panic of 1893 slowly, other issues had to be dealt with regarding mother nature. The railroad's route followed the Dolores River, which tended to flood many times during the railroad's lifetime.

Most of the terrain it went through experienced tons of snow in winter and occasional rock and mudslides in summer. The RGS was able to order two new rotary snowplows specifically for the railroad luckily before the panic of 1893 and later on built three plow flangers.

Still, depending on how deep the snow got, it often caused closures, and operating costs to operate trains with the necessary plow equipment was too much for the railroad at times because they required two to four locomotives to push them. Many Bridges and Trestles washed out when rivers flooded over, adding more costs to railroad maintenance and closures.

The Depression of the 1930s was devastating for RGS and forced the road into position in which they could not afford to operate a single steam locomotive (Paying for Fuel, Paying the Engineer and Fireman to operate the locomotive, etc.). 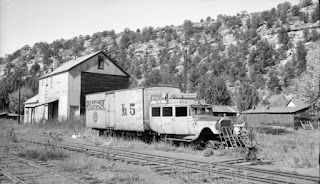 No. 5 Motorcar in Dolores.

But still they had the responsibility to ship US Mail.

Chief Mechanic Jack Odenbaugh devised a way to construct seven homemade "railcars" in 1931, that would be cheap to build and operate, capable of transporting US mail and a few passengers. The official names given from the RGS were "Motors", but these railcars would later be unofficially named "Galloping Geese" by Railfans because of how they looked, operated, and sounded.

"Waddling down the poorly maintained, unlevel RGS tracks with a silver-painted body and hood covers that looked like goose wings when opened up to prevent the motor from over-heating, and the horn sounding somewhat like a honking goose."

The first Goose (RGS Motor #1) was built from a recycled Buick body, frame, and engine, and #2 and would be as well, but with a larger and enclosed freight compartment, a requirement to haul US mail. Motors #3 through #5 and #7 were built from Pierce Arrow bodies, but with freight compartments the size of a boxcar. Motor #6 was made from a Buick as well, but it was designated for Maintenance of Way (MOW) service, and only had a flatbed attached behind the cab. Later on, Motors #3 through #5 would receive replacement Wayne Buss bodies.

These motor cars indeed were successful and handled daily services until 1940 when the RGS could afford to run regular freight trains. Even after that, the Geese completely replaced revenue-generating passenger trains until abandonment; almost all passenger coaches the RGS owned at the time had been put into MOW service since. 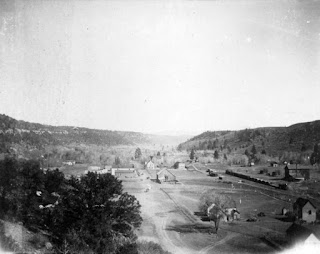