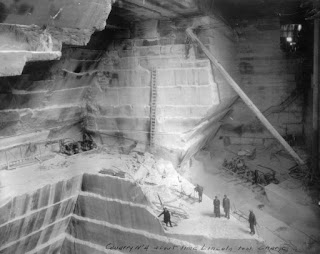 Marble Quarry No. 4 at Colorado Yule Marble Company, about 1915

Watching the festivities and ceremonies of the recent inauguration, and before that – the insurrection at the US Capitol – I couldn't help but but marvel at the Colorado Yule Marble that comprises many of the notable landmarks of our nation's center of government, and admittedly, wonder if members of the angry mob before were completely stoned. 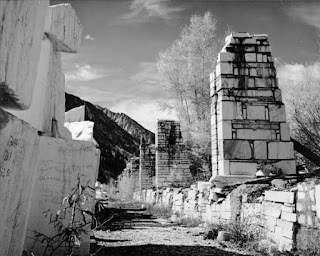 Marble slabs at the abandoned remains of the marble mill site, in Marble (Gunnison County), Colorado. The marble towers were a reinforcing (added 1914-1915) of every fourth or fifth wooden tower supporting the two overhead cranes.

Yule Marble is a marble of metamorphosed Leadville Limestone found only in the Yule CreekValley, in the West Elk Mountains of Colorado, 2.8 miles southeast of the town of Marble, Colorado. First discovered in 1873, it is quarried underground at an elevation of 9,300 feet above sea level—in contrast to most marble, which is quarried from an open pit and at much lower elevations.

At its peak, the Colorado Yule Marble Company employed several hundred men at the enormous finishing mill at Marble, with a high percentage of them being skilled laborers from Italy. The quarry employed around 125 men, according to Western Mining History.

Marble peaked in 1914 with around 1,500 residents. The town had two newspapers, three hotels, a movie theater, an ice cream parlor, and numerous other businesses. Some buildings in town featured marble foundations, certainly a very unique construction material for a frontier mining town, says Western Mining History.

Starting in 1905, the Yule Marble Company developed the quarries at Marble, and to this day the marble shipped from this location is identified as being Yule Marble, a particularly fine product that is known around the world.The marble of the quarry is considered to be of exceptional quality, praised as one of the purest marbles ever quarried and a rival to classical Italian and Greek marble. It is nearly pure calcite marble with minor inclusions of mica, quartz, and feldspar, and has irregularly shaped calcite grains ranging from 100 to 600 micrometers in diameter. According to physical tests of the marble, its strength is comparable to marble typically used in building construction. 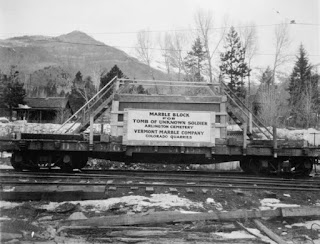 Marble block on its way to Tomb of the Unknown Soldier, 1931.

The localized geology created a marble that is 99.5% pure calcite, with a grain structure that gives a smooth texture, a homogeneous look, and a luminous surface. It is these qualities for which it was selected to clad the exterior of the Lincoln Memorial and a variety of other buildings throughout the United States, in spite of being more expensive than other marbles. The size of the deposits enables large blocks to be quarried, which is why the marble for the Tomb of the Unknowns, with its 56-long-ton die block, was quarried from Yule Marble.

Yule's quality comes at a high price due to the cost of quarrying in a high-altitude mountain environment. This challenge has caused the industry and the town of Marble to undergo many boom-and-bust periods since quarrying started in the mid-1880s, making the town emblematic of the economic fluctuations that beset a single-industry economy. Technology advancements in quarrying machinery and transportation have reduced, but not solved, the cost problem that afflicts the operation through the present. 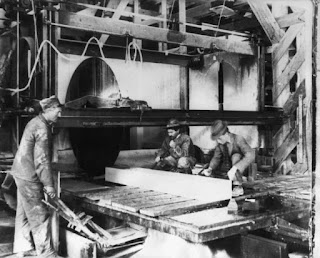 Yule Marble has been used in many famous buildings and monuments in the United States and around the world, including the Lincoln Memorial, Washington Monument, Hearst Castle, Tomb of the Unknown Soldier, and numerous capital buildings, banks, and hotels.

Despite the fabulous quality and quantity of the Yule Marble, the quarries and town of Marble have experienced numerous booms and bust periods related to conditions in the world market for marble products, and the extremely high cost of quarrying the stone from the steep alpine terrain.

By World War I, the market for marble collapsed and most of Marble's Italian stone workers returned to conscription in the Italian army. Marble’s population dropped to 50 people.

In 1922,   marble production resumed, but on a much smaller scale, says Western Mining History. 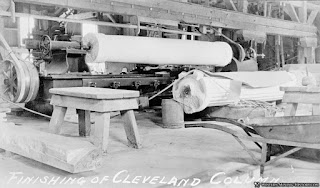 The building is in the form of a Greek Doric temple and contains a large seated sculpture of Abraham Lincoln and inscriptions of two well-known speeches by Lincoln, The Gettysburg Address and his second inaugural address. The memorial has been the site of many famous speeches, including Martin Luther King Jr.'s "I Have a Dream" speech, delivered on August 28, 1963, during the rally at the end of the March on Washington for Jobs and Freedom.

The exterior of the Memorial echoes a classic Greek temple and features Yule marble quarried from Colorado. The structure measures 189.7 by 118.5 feet and is 99 feet tall. It is surrounded by a peristyle of 36 fluted Doric columns, one for each of the 36 states in the Union at the time of Lincoln's death, and two columns in-antis at the entrance behind the colonnade. The columns stand 44 feet tall with a base diameter of 7.5 feet. Each column is built from 12 drums including the capital. The columns, like the exterior walls and facades, are inclined slightly toward the building's interior. This is to compensate for perspective distortions which would otherwise make the memorial appear to bulge out at the top when compared with the bottom, a common feature of Ancient Greek architecture. 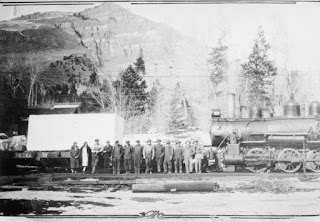 Block of marble ready for shipment use on Tomb of Unknown Soldier, February 3. 1931.

Tomb of the Unkwown Soldier

The most famous product of the Yule quarries was the Tomb of the Unknown Soldier, components of which were quarried in 1930 and 1931. The largest single slab of marble ever found weighed 100.8 tons and was quarried in Yule, Colorado. A portion of that slab was cut for use as the copingstone at the Tomb of the Unknown Soldier in Arlington National Cemetery in Virginia.

The largest block, called the die, took three quarry attempts requiring 75 men working for a full year. The resulting block was 124 tons and had to be lifted by a heavily rigged and reinforced derrick, then transported over a period of 4 days down the mountain to the mill, says Western mining History.

World War II signaled the end of marble production for over four decades. In 1942 the mill was disassembled and the railroad tracks removed. The town of Marble was reduced to just 30 people and in 1943 the post office closed.

The Yule quarry was once again activated starting in 1988 and has operated intermittently since with at least four different owners during this time. An Italian company has operated the quarry since 2010 and is still active today. 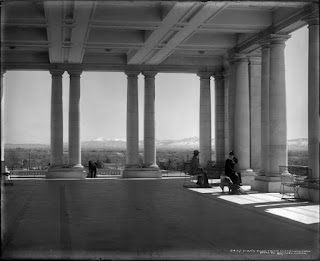 Cheesman Park Pavilion in Denver, Colorado (completed in 1910); view of Pikes Peak is framed by Colorado Yule marble column
Posted by ___ Restless Native at 11:50 AM