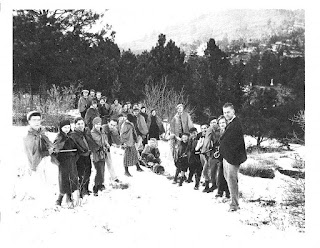 Two Christmas towns share the magic across the country

Lake Placid, New York, and the Colorado Springs area share some history, the same type of terrain —and if nothing else — a Christmas town feeling.

According to High Peaks Resort Director of Marketing Lori Fitzgerald, at the the time,  the 7 ft 'x 8 in birch log was  decorated with a big red bow for all to seek and find, as part of the annual Lake Placid Holiday Stroll.

"Custom dictates that a piece of the Yule Log is saved and then used to start the fire for the next year's log. In 1934 two residents of Palmer Lake, Colorado sent for a splinter of the Lake Placid Yule Log and held their first event that year. This year's log was started from a piece of the Palmer Lake, CO Yule Log which ties back to the original Lake Placid tradition. So the Lake Placid Yule Log has come full circle and now High Peaks Resort hopes to share splinters of this historic custom with other communities."

According to the Palmer Lake Profile – 1920 to 1972 portion of the updated Marion Savage Sabin’s book “Palmer Lake: A Historical Narrative,” the Depression brought many hardships, the W.P.A., and little growth to Palmer Lake. But it also brought us the Yule Log celebration.

“An old English custom was adopted in 1934 which has far-reaching effect on the town and its residents,” the book holds. “At the suggestion of Miss Lucretia Vaile, Miss (Evalena) Macy and the young people of the church (Little Log Church) sent for a splinter of the Lake Placid Yule Log in New York and organized the first Palmer Lake Yule Log ceremony.”

Another Christmas connection between the Lake Placid, N.Y., and the Pikes Peak area has to do with Santa.

"It was announced on March 10, 1955 that a 25 acre Santa’s Workshop was planned to be built on the slopes of Pikes Peak. The village was to be identical to the one built in Lake Placid, NY. The village in NY was designed by Arto Monaco, a former Walt Disney artist. In the 1940’s an eight-year old girl told the artist what she believed Santa Claus’ home and village looked like. Mr. Monaco then translated her image of the magical land into blueprints for an actual village," according to history information from

"A village of 12 alpine buildings was in the plans to be constructed. A home for Mr. & Mrs. Claus, 3 workshops, a blacksmith shop, gate house, reindeer barn, souvenir shop, show house, Mother Hubbard’s Cupboard and a miniature chapel with nativity."

One of the main attractions is a frozen North Pole that is in the center of the village. No matter how hot the temperature the pole remains frozen. A small lake enhances the village setting. Water winds a course over 2 waterfalls into the lake and then out onto a water wheel.

June 16, 1956, that young girl’s dream came true when Santa’s Workshop/North Pole opened for the season. Our Santa (Howard P. Meehan) certainly didn’t need any extra padding when wearing his red suit. He was 5’6 ½” tall and wore a size 54 suit!

"College girls in colorful gnome costumes were stationed in the artisan, souvenir and toy shops. Costumes were fashioned in grays and greens that blended into the woodland setting at the workshop. It wasn’t an easy task to become one of Santa’s 50 gnomes. You had to meet very strict qualifications to even be considered. Santa’s gnomes had to be 5’ to 5’3” tall; 105 to 110 lbs.; reddish or dark hair; large eyes (preferably blue); dimples and be “quick of step” and enthusiastic. All gnomes were chosen with careful judging by a Denver charm school and had to pass aptitude tests in dealing with the public," according to the local North Pole's history.

"Rufus Porter was Santa’s hurdy-gurdy man. While Rufus played his hurdy-gurdy, his pet monkey would politely tip his hat when people dropped pennies into his cup. Coins collected in the cup were combined with money from the wishing well to provide gifts for the needy and orphaned children at Christmas time. Storybook characters, Red Riding Hood, Miss Muffet and BoPeep were also on hand to tell their stories to children who stopped and chatted with them," if you subscribe to Santa's Workshop lore.

White deer, goats, sheep, burros, ducks and peacocks roamed the park to the delight of young and old. Special food and bottled milk were available for guests to feed the animals.

1958 brought Santa’s Workshop’s first “rides.” The Mine Ride was the first to be added to the park. Later in the season the Stage Coach and an authentic Fire Engine were featured. And different features were added later.

"Santa’s Workshop has grown through the years, but pure enjoyment of the Christmas spirit has remained the same for the past 61 years," says recent park information.

But Christmas was just a warm-up for items shared in the tale of the two cities.  Lake Placid and the  Pikes Peak area had other cosmic connections.