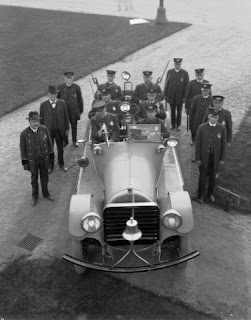 Unit designed to counter an epidemic of bank robberies

If you are a police officer, or even a private crime fighter, it can be hell trying to keep up with the crooks. Evidence: the Batmobile, Starsky and Hutch's Gran Torino, Scooby Doo's Mystery Machine, or even Magnum P.I.'s Ferrari GTS 308. Nothing illustrated that idea more that advent of Denver's Auto Bandit Chaser.
"With the widespread use of the automobile, the motor bandit has come into existence as the modern successor of the old-time Knight of the road. The auto bandit is the most daring, ingenious, and swiftly moving hold up of all time, and payroll messengers, banks and trains are his prey," says the February, 1921, edition of Popular Mechanics in an article by E.C MacMechen.
"The city of Denver has made special provision for the construction of an auto bandit chaser, a 90-hp, armored car with racing ability. The car is under construction now. The manager of safety procured a standard chassis and engine, and the special body is being built by city shops."
Listed as features of the car were as follows:
• It has no windshield.
• Three tiers of seats, holding officers armed with trench guns.
• On the wide running boards, just in front of the rear fenders, are single chairs with shoulder rests, each holding an officer with a trench gun.
• The wheels are protected by armor-plated fenders, reaching well around the axle, so that the bandit chaser may run against a fleeing car and force it into the ditch.
• The radiator is guarded with steel plates, and the car has a steel ram, capable of knocking down a board fence, or breaking through a barbed wire fence, if the bandits take to the open prairies to the east of Denver.
• The tiers of seats — each enabling its occupants to shoot over the heads of those in the seat before them —and side seats , allow eight officer to shoot at the car ahead with high-power rifles.
• The car has no top to obstruct vision.
MacMechen writes that, "The idea of the car germinated after numerous auto bandits had escaped pursuing officers because the latter had to lean around the windshield to shoot."
According to MacMechen:
"The car will come into the greatest use after robberies of unusual magnitude, the bandits in such cases usually leaving the city in high-power cars and taking to the prairie or mountain roads. Nearly always it is possible to get trace of their route from filing stations."
Other publications also weighed in, at the time.
"Crime in varying phases, which has recently swept over the country, is tasking the resourcefulness of the several police departments to frustrate the lawless element and to capture the criminals. New methods employed by the law breakers are being met by new methods of detection and arrest, one of the latest being the auto bandit chaser which the city of Denver intends to install as a unit of its police equipment," said a 1921 edition of The Modern City.
"Police methods of apprehending criminals must change with the times. Instead of the mounted highway men of the cross roads and bands of desperate horsemen that held up trains a dozen years ago, police officers are now called upon to check a type of bandit more resourceful and swifter in flight than the world has ever known. The automobile is responsible for the development of the motor bandit. Not only have highwaymen taken to automobiles, but the whiskey runner, who has started operations in all parts of the country since the advent of prohibition, is as daring an outlaw as the train bandit and will shoot to kill just as quickly," noted The Modern City.
Kansas Banker noted also the changes in the supposed demographic makeup of the the new outlaws.
"The modern bandit appears to mostly young men in their early twenties, of the wise-'cracking' 'gun-flashing' silk-shirted, cake-eater type, each the proud possessor of a supposed-to-be smart 'Broad.'
According to Elizabeth Victoria Wallace in her book Hidden History of Denver at least some parts of the elaborate plan of an Auto Bandit Chaser to wreak havoc on crime was a bit of a pipe dream.
"It is reported that when a policeman fired the machine gun during a demonstration, it rocked loose from its base and was ineffective," she wrote.

Photo Information: Denver police officers pose with Denver's Auto Bandit Chaser in Civic Center Park in the Civic Center Neighborhood of Denver, Colorado. The car is a Cadillac modified by the Izett Auto Body Company to include bullet-proof armor plate, a bullet-proof windshield, spot lights, and a machine gun. Captain George Merritt aims the machine gun from the front passenger seat. Men of the riot squad occupy the other seats and hold bayonets, trench guns, and high powered rifles. Officials from city government and the police department stand nearby. Prominent individuals include from left to right: Manager of Safety and Excise, Frank M. Downer; Chief of Police, Herbert R. Williams; and Acting Deputy Chief, Robert Carter. The Voorhies Memorial is in the distance. 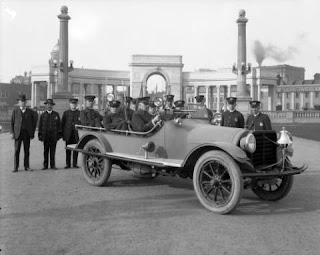