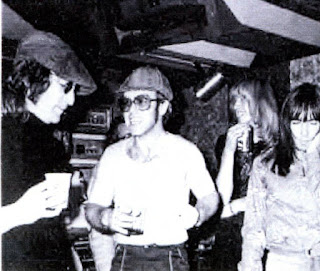 The first true radio hit recorded at Caribou Ranch was Joe Walsh's "Rocky Mountain Way." In addition to Chicago (starting with Chicago VI), the studio has been used by numerous other artists: Elton John (for his Caribou album as well as Captain Fantastic and the Brown Dirt Cowboy and Rock of the Westies), Dan Fogelberg, Billy Joel, Rod Stewart, Carole King, Stephen Stills, Waylon Jennings, Amy Grant, Supertramp, Badfinger and The Beach Boys. Unfortunately, the studio complex was shut down and never used again after a March 1985 fire destroyed the control room and caused about $3 million in damage.
James William Guercio, an American music producer, musician and songwriter, built the recording studio in the early 1970s.
"What Walsh ended up discovering was the soon-to-be-famous Caribou Ranch. Built on 4,000 acres of land outside Nederland, Colorado, Caribou Ranch was the improbable home of a budding recording studio. In time, it would become one of the finest studios in the world, recording legendary musicians such as Stevie Nicks, Tom Petty, U2, Chicago, and Billy Joel, among others. Elton John recorded his 2x platinum album Caribou there," wrote Jeff Suwak, a writer and editor living in the Pacific Northwest.
"But when Walsh arrived at Caribou Ranch in 1972, it was little more than a partially renovated barn, with only one room fully completed. During the recording of Barnstorm, the eponymous first album made by Walsh’s new band, the band members had to urinate down an elevator shaft. But James William Guercio, Caribou Ranch owner, had hired Tom Hidley, ex-Beach Boy and now one of the top designers in the world, to transform the ranch into a world-class recording locale. Guercio's association with the Boys stemmed from filling in on a few of their tours in the early '70s, Suwak said.
Joe Walsh's Barnstorm album Barnstorm was only moderately successful. But the albums following, 1973's The Smoker You Drink, the Player You Get, which featured "Rocky Mountain Way." Walsh had his first major commercial hit.
"Jim Guercio got his start in the '60s band The Buckinghams before producing Blood Sweat & Tears and most famously Chicago. He took his riches from those and started a variety of projects, most notably Caribou Studios. Located in the mountains near Nederland, Caribou was a 19th-century dude ranch turned into a state-of-the-art recording studio that made Colorado the middle of the music universe in the '70s. It was secluded behind two gates for privacy and very few people ever saw it, despite more than 170 artists recording there from the early '70s to the mid-'80s, when a fire shut it down. Musicians lived in bunkhouses on site while recording albums, the first "destination" studio. John Lennon, Elton John, Joe Walsh, Supertramp, Waylon Jennings, the Beach Boys, America, Jeff Beck, Earth Wind & Fire, Rod Stewart, Stephen Stills, Stevie Nicks, Stevie Wonder and dozens more recorded there at their peak of popularity. Elton named an album Caribou in its honor, and his massive selling Captain Fantastic and the Brown Dirt Cowboy was recorded entirely there. Walsh's Rocky Mountain Way was written and recorded there. Due to the ranch's secluded nature (far enough off the beaten path that they actually let Stevie Wonder drive a jeep around) and Guercio's reclusiveness not much has been written about the place," wrote Javier Manzono, in a pitch for Rocky Mountain News Story, before the paper closed. The photo archive of the News, ended up in Denver Public Library's Digital Collection.
Posted by ___ Restless Native at 7:55 AM