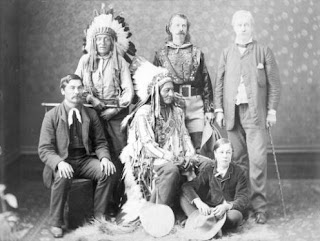 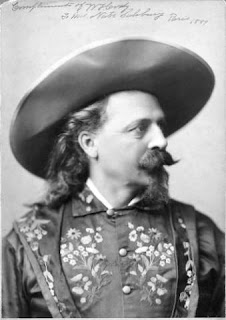 
Buffalo Bill has widely swung from one end of the popularity spectrum,  to the other, and back a few times, in my lifetime.
He is the poster child for the duality of the Western reality.
When I was a young buck, his tall buckskin-clad persona epitomized the American Western hero. When we realized he killed so many buffalo, and Native Americans, that he was written off as "a white male chauvinist, and violent bigot who slaughtered animals and native Americans," we struggled a bit, but he liked to party, and he always came across as one the best-looking, and coolest hippie-like characters we could imagine.
"Western history without Buffalo Bill would have astonished 20-Century Americans," notes Thomas J. Noel, (Dr. Colorado) in "Mile High City,  An Illustrated History of Denver."
"Cody's career began when he ran away from home at age 13 to join the Colorado Gold Rush. A year later he became a Pony Express rider who boasted he covered 322 miles in 21 hours and 40 minutes using 21 horses."
"Bill killed, according to his own account, 4,280 buffalo," says Noel.
"Cody also hunted Indians. He slew Yellow Hand, a Cheyenne leader, in 1876 and boasted, "Jerking his war bonnet off, I scientifically scalped in about five seconds ...  As the soldiers came up, I swung the Indian chief's top-knot and bonnet in the air, and shouted "The first scalp for Custer!"
Despite that,fame as an Indian fighter, "He later befriended many of his former foes," says Noel. "Ironically, the Indians he helped put on the reservations found some of their better-paying and more gratifying jobs with Cody, traveling the U.S. and Europe as performers with the Wild West Show."
"Kings, queens and presidents attended Buffalo Bill’s Wild West and it is estimated that more than 25 million words were written about the famous scout during his lifetime, making his silver goatee, buckskin jacket and wide Stetson hat more recognizable and famous than anyone in the world at the time. When he died in 1917, while visiting his sister in Denver, his body was put on view in the state capitol," says the City of Golden's site.
"And there began the controversy. He died in January, but could not be buried on a frozen mountain top, at his request, until June. The body was stored in what is now Lola’s Restaurant in Denver (then a mortuary). In the early 1900s, some people from Wyoming claimed they snuck down, took Buffalo Bill’s body, and replaced him with another body from the mortuary. Unfortunately for this legend, their story is undone by the fact that Bill had an open casket at his burial on top of Lookout Mountain in 1917, with thousands of witnesses paying tribute to the famous scout who they certainly recognized,"  says the Golden site.
William Frederick "Buffalo Bill" Cody was an American scout, bison hunter, and showman born in Le Claire, Iowa Territory (now the U.S. state of Iowa), but he lived for several years in his father's hometown in Toronto Township, Ontario, Canada, before the family returned to the Midwest and settled in the Kansas Territory.
Buffalo Bill started working at the age of eleven, after his father's death, and became a rider for the Pony Express at age 14. During the American Civil War, he served the Union from 1863 to the end of the war in 1865. Later he served as a civilian scout for the US Army during the Indian Wars, receiving the Medal of Honor in 1872.
One of the most colorful figures of the American Old West, Buffalo Bill's legend began to spread when he was only twenty-three. Shortly thereafter he started performing in shows that displayed cowboy themes and episodes from the frontier and Indian Wars. He founded "Buffalo Bill's Wild West" in 1883, taking his large company on tours in the United States and, beginning in 1887, in Great Britain and continental Europe. He became the rough equivalent of a rock star.
Larry McMurtry, along with historians such as R.L. Wilson, asserted that at the turn of the 20th century, Cody was the most recognizable celebrity on Earth.
"While Cody's show brought appreciation for the Western and American Indian cultures, he saw the American West change dramatically during his life. Bison herds, which had once numbered in the millions, were threatened with extinction. Railroads crossed the plains, barbed wire and other types of fences divided the land for farmers and ranchers, and the once-threatening Indian tribes were confined to reservations," according to McMurtry. 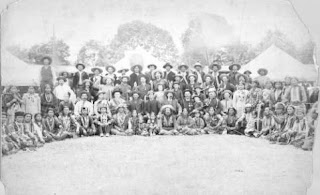