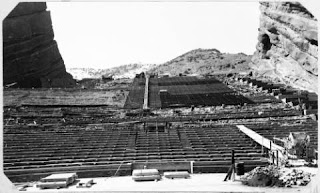 In harmony with the natural surroundings, the outdoor theater is an architectural and acoustical triumph

Red Rocks Park, purchased by the city of Denver in 1928, contains a remarkable landscape of red sandstone monoliths that has been a regional attraction since the 1870s— at least.
The current amphitheater, completed in 1941 by workers from the nearby Civilian Conservation Corps camp, Red Rocks began its iconic rise to star-graced stardom early in the twentieth century, as owner John Brisben Walker had a vision of artists performing on a stage nestled in the perfect acoustic surroundings of Red Rocks, which likely were used by the Ute tribe in earlier times.
Walker produced a number of concerts between 1906 and 1910 on a temporary platform; and from his dream, the history of Red Rocks as an entertainment venue began.
The city of Denver bought the 728-acre property from Walker for $54,133.
In addition to the platform, Walker also built the Mount Morrison Cable Incline funicular railway which carried tourists from a base at what is today the parking lot of the amphitheater up to the top of Mount Morrison; the incline operated for about five years beginning in 1909.
Originally the place was known as the "Garden of the Angels" (1870s-1906), and then as "Garden of the Titans" during the Walker years (1906–1928). The park, however, had always been known by the folk name of "Red Rocks," which became its formal name when Denver acquired it in 1928.
"This theater was the dream of George Cranmer, a wealthy ex-stockbroker, who had liquidated his firm a year before the stock market crash. He had long been fascinated by the  large rocks jutting up at the base of the mountains west of Denver. While traveling in Sicily, he saw the Greek outdoor theater at Taormina and envisioned a Denver counterpart," wrote Denver historian (Dr. Colorado) Thomas J. Noel.
In 1927, George Cranmer, Manager of Denver Parks, convinced the City of Denver to purchase the area of Red Rocks from Walker for $54,133 ($789,859 today). Cranmer convinced Benjamin Franklin Stapleton, the Mayor of Denver, Colorado, to build on the foundation laid by Walker.
"Mayor Stapleton in 1935 appointed Cranmer as manager of Improvements and Parks, giving him a chance to realize his Red Rocks dream. Stapleton regarded Denver's Red Rock Mountain Park as a giant rock garden. Cranmer conversely, wanted to make it the giant outdoor theater by leveling the boulder-strewn area between two massive outcropping for seating. He convinced CCC officials to proceed quietly with plans to clear the area. Workers took several days to set all the dynamite charges. Then they blew up all the baby boulders at once — pulverizing Stapleton's rock garden," according to Noel.
By enlisting the help of the Civilian Conservation Corps (CCC), and Works Progress Administration (WPA), labor and materials were provided for the venture. Construction of the amphitheater began in 1936 and was opened to the public in June 1941. Red Rocks Amphitheater was designed by Denver architect Burnham Hoyt, in harmony with the natural surroundings, making the theater an architectural and acoustical triumph.
The walls of the amphitheater contain records dating back to the Jurassic period of 160 million years ago as nearby dinosaur tracks have been discovered as well as fossil fragments of the 40-foot sea serpent Plesiosaur.
The earliest notable rock-and-roll performance at Red Rocks was by The Beatles on August 26, 1964, the only concert not sold out during their US-tour.
Since then, legendary concerts from the likes of U2, The Grateful Dead, Phish, Blues Traveler, Steve Martin, John Denver, Willie Nelson and almost everything in between, has graced the hallowed stage there. 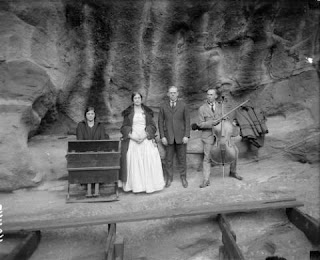 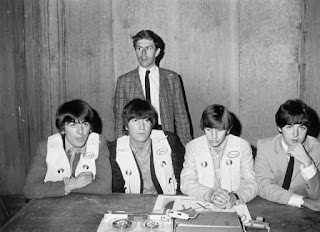 Photo Information:
Top photo: Red Rocks during construction of the seating area by Civilian Conservation Corps in the 1930s.
Center photo: Early day musicians before construction of the amphitheater.
Bottom photo: Beatles and their publicist Derek Taylor at Red Rocks. Photo by Ken Mausolf, courtesy of Denver Theatres and Arenas.
Posted by ___ Restless Native at 8:16 PM