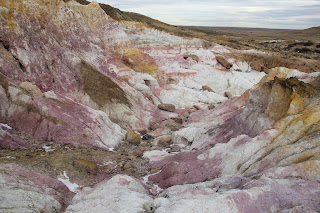 Tucked away in the northeast corner

The Paint Mines, just a short distance (about a mile) from Calhan, in the northeast part of El Paso County, seems like the perfect backdrop for a murder mystery.
The landscape is surreal, windblown, a little desperate, and above all else — mysterious.
I can just imagine one of C.J. Box's characters uttering something like: "Nothing spells trouble like two drunk cowboys with a rocket launcher.”
Or perhaps, something from Tony Hillerman:
"You notice anything about the skeletons?” Leaphorn was squatting now in the shallow trench, examining bones. “Somebody seemed to be interested in the jawbones,” Chee said.
It is the kind of country that inspires. Natural, beautiful, and able to hold its own in a fight — with more than a little bit of its own crazed sort of meanness.
"The landscape has fascinated people for thousands of years, and continues so to this day. Located on the Colorado eastern plain, the area transitions from wetland, to short-grass prairie, to badland topographies," says History Colorado (the state historical association.)
"Wildlife seem to enjoy the surroundings as much as humans do – mule deer, coyote, falcons, hawks and an adventuresome mountain lion or two have been spotted there. Archaeological investigation, funded through a State Historical Fund grant, has substantiated prehistoric and historic American Indian occupation as evidenced by the finding of stone dart tips, arrow heads, and petrified wood used in tool manufacturing.  The local clay was mined for use in ceremonial paint as well as pottery making.  A homestead site within the boundary confirms the use of the property by Euro-American settlers in the 1800’s.  The significance of the site has led to the designation of the Calhan Paint Mines Archaeological District by the National Park Service.  Used by hikers, birdwatchers and as an outdoor laboratory by geology students, the site has come under the protection of the El Paso County Parks Department.  A recent State Historical Fund grant has gone toward funding a master plan to balance the legitimate public uses and to address threats such as “pot hunting” and vandalism," History Colorado says.
Over time, the State Historical Fund has awarded $82,000 to the El Paso County Parks Department for archaeological survey and master planning at the Calhan Paint Mines.
"Located in the northeast section of the County near Calhan with approximately 750 acres. The paint mines have evidence of human life as far back as 9,000 years ago. The colorful clays were used by Native Americans. The park features fantastic geological formations including spires and hoodoos that were formed through erosive action that created incised gullies and exposed layers of seienite clay and jasper. The park includes a restroom facility, four miles of trails, interpretive signage, and many natural wonders," says El Paso County. Though, in a cruel nod to the mystery of the place, the restrooms are not always open.  Parking can fill up as well.
"The unique geological formations and colorful clays have been attracting visitors for thousands of years. Early archaeological evidence of Native American use at the site dates back over 9,000 years. Because of these valuable archeological resources within the park,  the area is listed on the National Register of Historic Places, said Justin Henderson, in the a Parks Management Plan for El Paso County in 2010, when the county first acquired the responsibility for managing the park.
"In addition to these cultural resources, the park also features many natural and recreational resources. The Badland geology of the site has led to erosive forces that have cut deep gullies in the surrounding hills, exposing clay while at the same time creating amazing geological formations called hoodoos and spires. The grasslands and prairie provide a natural setting for the Park on the Front Range, which is experiencing tremendous growth and sprawl. Through a partnership with the Palmer Land Trust, sections of the Park are protected under a conservation easement. These natural geological features and open prairie landscapes attract visitors to the Park, and are a valuable scenic as well as recreational resource for the community. Only a thirty-five minute drive from downtown Colorado Springs, Paint Mines provides a uniquely different park experience for residents of El Paso County," noted Henderson, at the time.
To me, it is still a mystery that more people don't know about this place. 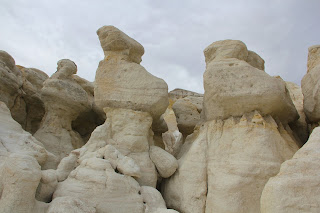 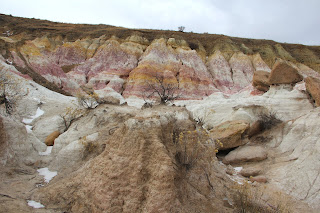 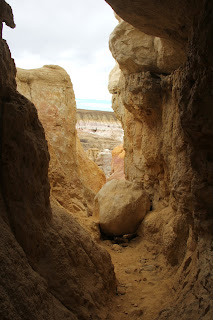 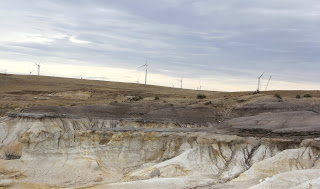 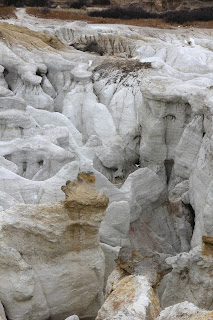 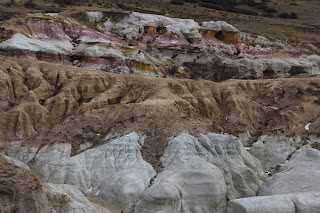 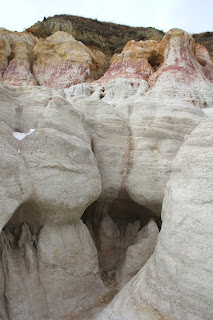 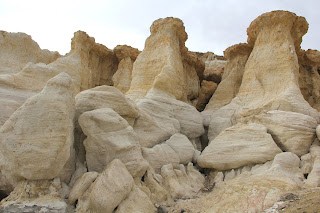