Difficulties at the saloon locally 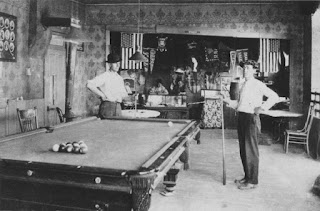 Ernest Hemingway often said he drank to make other people more interesting. A little more than 100 years ago, it became increasing difficult to get a drink here in Colorado.  And here in Monument ...
Well, off and on, between the Whiskey men and temperance — it was interesting.

“In 1912, an amendment to prevent the manufacture and sale of liquor was submitted to the electorate,” wrote Carl Ubbelohde, Maxine Benson and Duane A. Smith in A Colorado History.

“The voters defeated the proposal. But that defeat stirred the various groups to common action. Submerging their differences, they sponsored another amendment two years later. This time the voters answered the question of ratification affirmatively, approving an experiment in social engineering, despite a two-to-one rejection of the amendment in Denver. The ‘wet’ forces in the capital city threatened to use the new ‘home rule’ prerogatives of the city to escape the effect of the law, but on Jan 1, 1916, prohibition became the rules in Denver and all of Colorado.”

Colorado was joined by six other states, (Iowa, Oregon, Washington, Idaho, Arkansas, and South Carolina) at that stroke of midnight as 1500 saloons across the state, 500 hotels, restaurant and drugstores stopped selling, and 12 beer breweries closed.

Lucillle Lavelett documented it this way in "Through the Years at Monument" and "Monument's Faded Neighbor Communities and Its Folk Lore."

"Monument always had its saloons and whiskey men. Two murders were committed in Limbach saloon. A feud between Daniel Davidson and Francis Brown developed over a cattle transaction, each accused the other of stealing cattle, On Oct. 21, 1876, they met in the saloon and exchanged words. Davidson drew his pistol and shot Brown twice. Brown died almost instantly.

"He is buried in the Monument Cemetery, and his stone reads: 'He was killed.' A trial was held in February, 1877. The jury found Davidson guilty. His lawyers obtained a writ of supersedeos and he was released on bond of $5,000. Almost three years of litigation followed. The second trial began on Feb. 13, 1880 and on Feb, 21, Davidson was found not guilty. He was elected to the Town Board in 1881 and Davidson was the promoter of the ordinance passed prohibiting the shooting of firearms in town, and increasing liquor licenses $300 per year," Lavelett wrote.

"The second murder committed in a saloon was a feud between Rube Pribble and a Mr. Neff.  Mr. Pribble accused Neff of stealing a plow from him. Mr. Pribble shot and killed Neff. On Sunday morning when he was shown Neff's body, his only words were, "I have killed my best friend."

Pribble was found guilty and sentenced to life in the penitentiary. On the second trial it was brought out Neff had not stolen the plow but a third party had, and hid it in the barn. Pribble, this time was sentenced to 25 years, but died of pneumonia in a short time," reported Lavelett.

With prohibition, many saloons became lunch counters and soft drink fountains and for the first time, women (other than those working the saloons) were welcomed.

In Monument, however, Limbach's Saloon became a pool hall operated by Bob Burell for a few years, starting in 1916, on the east side of Front Street. Saloons already had periodically faced challenges here in town.

"The license fee to sell liquor in 1897 was $500. The town had a very active Women's Christian Temperance Union (W.C. T.U.) There was always battles going on between Temperance folks and Whiskey men," Lavelett wrote.

"The Whiskey men usually won every town election, except in April 1896. That year Ordinance No. 33 was passed prohibiting selling liquor in town. The W.C.T.U. folks sent a thank you resolution to Board Members to be written in the minutes. Evidently the Whiskey men gave the Temperance a bad time for it. One by one, Temperance resigned, until Whiskey got power again and Ordinance No. 36 repealed Ordinance No. 33, and the saloons were open again. One W.C.T.U. lady would gather up the whiskey bottles and hang them by the neck on her fence and put up a sign saying 'I am hanging John Barley Corn.'"

It had been an ongoing battle, according to Lavelett.

As early as  1881, the Monument Saloon was fined for keeping the window shades down on Sunday.

"Monument did not have a "peeping Tom" but there was a woman that lived in town who was very much opposed to saloons, and she was named 'peeping Sal.' She wanted to know who the men were who spent their evenings at the saloon, so she could give their wives a bad time. Most every night, she would go peek in the windows of the saloon, and several times the men had seen her."

Peeping Sal was known for disappearing down a narrow, one-way passage between the saloon and another nearby building, when spotted and she then remained in hiding. Reportedly, she was cured of the habit by saloon patrons pretending to be oblivious, urinating out of second story window into the hiding place.

"That was the cure for the peeping and the end of the sarcastic remarks to the ladies who husbands went to the saloon," Lavelett reported. 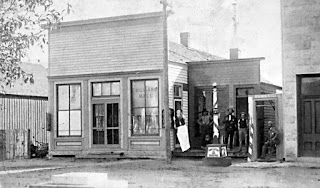