Nothing is more dangerous than a monster that you can't see to fight.
Our grandfathers and grandmothers remember. 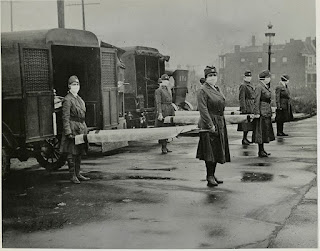 First reported case in Colorado, September, 1918:
"Spanish Flu” was first reported in Colorado on September 21, 1918, among the Student Army Training Corp stationed at the University of Colorado in Boulder. Hundreds of soldiers were sickened and 19 later died, according to Katie Randolph, of the Denver Public Library On September 27, 1918, a young Denver University student named Blanche Kennedy, died of pneumonia a few days after returning from a trip to Chicago, according to University of Michigan Center for the History of Medicine. It was Denver’s first influenza-related death.


Number of Coloradans who perished:
Between September 1918 and June 1919, nearly 8,000 Coloradans died from influenza and its complications. Colorado had one of the highest mortality rates in the country, possibly because it was home to a large population with compromised lung function (miners and tubercular patients) — folks at a severe disadvantage for fighting pneumonia.
“The flu in 1918 was a pandemic (rather than an epidemic) as it spread quickly and affected a large number of people across several continents. In Denver, Colorado Springs, and towns throughout the state, officials tried to control the spread of the virus by encouraging the use of face masks and placing restrictions on public gatherings, Randolph wrote.


Number worldwide killed by 1918-19 Influenza pandemic:
According to medical researchers, Flu infected 500 million people around the world, including remote Pacific islands and the Arctic, and resulted in the deaths of 50 to 100 million (three to five percent of the world's population), making it one of the deadliest natural disasters in human history.


Local response:
City Manager of Health and Charity and former Denver mayor Dr. William H. Sharpley took quick action, according to reports from University of Michigan Center for the History of Medicine. “Having heard reports of influenza across the state and assuming that the epidemic would soon reach Denver, he had proactively formed an influenza advisory board on September 26.
Sharpley urged the public to be on guard. He recommended that residents avoid needless crowding, cover all coughs and sneezes, keep their homes and offices well ventilated, and seek a physician at once if cold-like symptoms developed. He also offered the less-than-helpful recommendation to keep a clean mouth, a clean heart, and clean clothes, and advised those affected to make nature your ally, not your prisoner” by avoiding tight clothes and shoes,” reports said.
“Neither Sharpley nor the influenza advisory committee were convinced that the first eight cases near Denver were due to the same virulent “Spanish influenza” strain that was making its way across the nation.It was not until several days later, on October 4, when the number of cases and deaths had climbed rapidly, that Sharpley and the advisory board realized they were facing the deadly epidemic. Sharpley quickly ordered hospitals to isolate influenza patients in separate rooms and not in the general wards, or to use screen dividers between beds in institutions where such separation was not possible,” University of Michigan Center for the History of Medicine reported. Colorado Springs restricted some public gathering and canceled meetings. Other towns and governments followed suit.


Statewide, the effects of the pandemic varied:
Some of Colorado's mountain towns were crippled. Silverton, then a bustling mining town, lost 10 percent of its inhabitants. The flu was transmitted at a public gathering in Silverton. But Gunnison County, where Crested Butte is located, only lost two people. At the first precautionary warning in 1918, schools were closed across Gunnison County, and remained so for at least two weeks. County officials also required certain places to remain closed for four weeks. Anybody wanting to enter the county was required to be quarantined for two days. The school and business closures were finally lifted after four months, say officials in Telluride, who have studied the past in Gunnison while trying to prepare for a potential pandemic flu transmitted by avian species, in 2007. 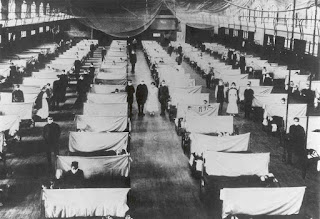 2. An emergency hospital at Camp Funston, Kansas, 1918. “Of the 12 men who slept in my squad room, 7 were ill at one time,” a soldier recalled. (New Contributed Photographs Collection / otis historical Archives / National Museum of Health and Medicine)
Posted by ___ Restless Native at 7:48 AM