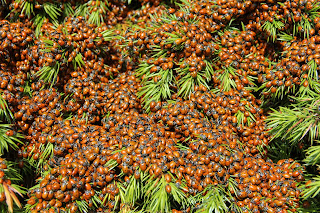 Mount Herman’s summit is a convergence destination, it seems.
“On Saturday my son saw these Lady Bugs on a hike up Mount Herman. Any idea what is going on?” Asked Karen Green last year, at about this time.
“The convergent lady beetle, Hippodamia convergens Guérin-Méneville, is among the most common lady beetle species throughout North America and is an important natural enemy of aphids, scales, thrips, and other soft-bodied insects. It will also feed on pollen and nectar from flowers when prey is scarce. This species can be found in habitats ranging from grasslands, forests, agricultural fields, gardens, and natural parks. It is one of the few natural enemies that are currently wild-collected from mass aggregations for distribution to the pest control industry, according to “Featured Creatures,” a University of Florida entomology publication.
Mountain-bound convergent ladybugs are not typically in swarms during these in-flight migrations. Occasionally, they will land on ground to consume pollens and nectars as a means to fatten up their bodies for survival during hibernation. However, once they find their desired high elevation summits they tend to swarm en masse and form colonies. Most of these mountain summit goals range between 6000’-8000’ elevation, but some might be as high as 10000’ elevation (or possibly higher) depending on current conditions.
It is during these periods of summit swarms that mountaineers most frequently notice the ladybugs. Where there is one ladybug there is usually hundreds if not thousands congregating nearby. Many ladybug dealers/collectors claim that some of these mountain colonies can contain as many as 500 gallons of ladybugs, with each gallon containing up to 72,000-80,000 ladybugs. The beetles remain on their high elevation homes throughout the Summer months. This timeframe represents the beginning of diapause, which is the nine-month period of hibernation process for convergent ladybugs. Many within the species will begin mating during this first stage of diapause, and larger colonies have greater chances for successful mating. 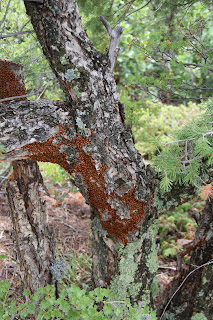 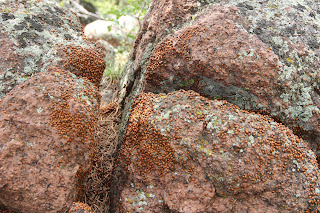