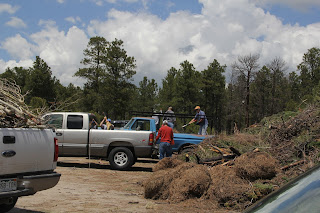 Slash and mulch site important to

Various organizations and volunteers call it the “FIG Book.” And reverent references to it appear everywhere.

“Read the Forestry Information Guide,” suggests Black Forest Together, an organization formed in the wake of the most destructive fire in the state's history that began near Highway 83 and Shoup Road in Black Forest, Colorado around 1 p.m. on June 11, 2013, eventually burning 14,280 acres. 509 homes were said to be destroyed, and two people had died.

Four years after the fire’s start, the “FIG book” is next rung down from religious text in certain circles. And folks who went through the fire may even argue with what should be in the top position, as they still work to clean up, and haul slash away.

What is the Slash-Mulch Site and Program? The FIG Book answers, saying “It is a wildfire mitigation, recycling program made available so that forestry management in the Black Forest is possible.”

The purpose of the Forestry Information Guide is to provide a summarized source of information for use in wildfire mitigation and forest health. The Slash-Mulch Program is a 24-years-old effort , co-sponsored by the El Paso County Environmental Division, the Colorado Forestry Association, the Colorado State Forest Service, and the Black Forest Fire Department, says Jeff DeWitt, one of three current directors. He says nearly 300 volunteers per year work at the site during the season.

The physical location of the site is one block south of Shoup Road on Herring Road, in Black Forest. They accept all parts of trees and bushes (including needles, cones,) eight inches or less in diameter, and six foot long or less. They don’t accept roots, stumps, grass, hay, garden trash, weeds, lumber, plastic, soil, or anything that is not tree or shrub debris.

Mulch made from grinding the slash, is available from late May through late September (Sept. 23) with a loader available on Saturdays only beginning in late May, 7 a.m. to 4 p.m. Loader fee is $5 per bucket (approximately 2 cubic yards.) There is a $2 fee charged per load (any size) and donations of non-perishable food for Care & Share and cash donations are appreciated.

DeWitt says that loads come in during the season from all over the County (and in some cases, other counties) and mulch is available while supplies last. The site is operated on Colorado School Section 16, in essence it really belongs to federal government, which gave the land, in trust to Colorado when it became a state in 1876. Today sections are leased or sold by State Land Board. El Paso County Solid Waste Division has a lease of 1.5 acres for the Slash -mulch program. 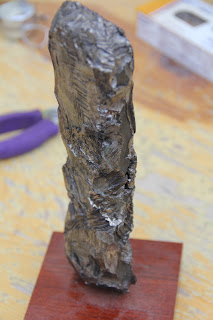 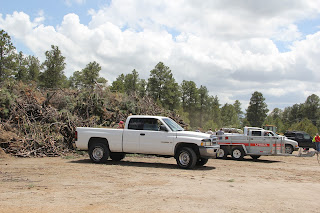