As I walked out in the streets of Norpaso ... 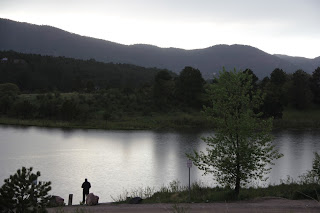 Because we can’t describe where we live, let’s rename it


“I’m not my name. My name is something I wear, like a shirt. It gets worn. I outgrow it, I change it.” ― Jerry Spinelli

I think there once was one of the those green signs on I-25 that said something about Gleneagle Drive, right on the highway. Now, of course, Gleneagle Drive never touches I-25. You have to take North Gate Blvd., go through two roundabouts headed east to the light to Struthers Road, take a left, and then turn right on Gleneagle Drive. Thursday, local fire departments set fire to the old Gleneagle Golf Clubhouse. Donald Wescott Fire Protection District was in charge of the training exercise.

That is the thing about names around here —if you wait long enough, some change.

That can create confusion. Last week, I thought about that when considering the various districts and jurisdictions, and responsibilities.

In my 20+ years in the area, I have seen quite a bit. It is possible to recall when you could count the total population in the Tri-View Metropolitan District, on your fingers, and maybe even one hand. Town (meaning Colorado Springs) was miles away to the south. Woodmoor was sort of out in the country then, Black Forest was just that, Palmer Lake and Monument were the only real towns.

And of course, Gleneagle was sort of like the Gaza Strip, a small, self-governing territory with a golf course and pool, east of the United States Air Force Academy, with several homeowners associations including Gleneagle Civic, Gleneagle North, Academy View, Sun Hills, and several others. It relied on service by Donala Water, fire protection by Donald Wescott Fire Protection District, your choice of gas companies (several options), power from Mount View Electric, policing by El Paso County Sheriff, education through Academy District 20, and mail service through the Colorado Springs Post Office in Briargate.

Areas to the North were similar, Woodmoor having its own security and fire service, a restrictive homeowners association, and other such elements of responsibility and jurisdiction. But, though it was close, Woodmoor, was not part of Monument, and relied on Lewis Palmer School District 38, that originally served Monument and Palmer Lake. Baptist Road was the dividing line between District 20 and District 38.

So let's complicate this with a few more things. Palmer Lake's rural postal routes originate out the Monument Post Office, the Douglas County line is right at the top of Monument Hill, Tri-View Metro District was created to take care of roads, water, and parks in Jackson Creek, one of the newer areas of Monument, the Monument Town water system just takes care of the part of town west of I-25, and there are several different other districts between there and Palmer Lake. Fire service is handled by Tri-Lakes Monument Fire Protection District (which now also includes Woodmoor). The city of Colorado Springs recently annexed about half of Donald Wescott Fire Protection District. Other residential areas have developed east of Woodmoor including Kings Deer, Bent Tree, Ridge at Fox Run, etc...

And what is the Tri-Lakes? Maybe about seven or eight old-timers can tell you what the three lakes are.

It is not necessarily surprising when someone has to call around to see who takes care of a problem with the neighbor's pet. Just a few weeks ago, I chuckled a little when the Drug Enforcement Agency described a marijuana grow as being at Monument home, when it was nearly five miles northeast of the city limits. But the El Paso County Sheriff labeled a problem last week at the Brewery on Woodmoor Drive as being a Colorado Springs address.

I would like to petition you folks right now to change the name of this area. We have outgrown it. And we can't even describe where we do live. Let's do something that reflects the combinations that we have become. Something that accurately reflects our diversity, and history. Yet, it needs to be simple and all-encompassing. May I suggest Norpaso.
Posted by ___ Restless Native at 7:03 AM